Another storm in the income fund tea cup | Value Research https://www.valueresearchonline.com/stories/30361/another-storm-in-the-income-fund-tea-cup/ Income fund investors should pay attention to the credit downgrade of Jindal Steel, but not let their imaginations run away with doomsday scenarios

Another storm in the income fund tea cup

Income fund investors should pay attention to the credit downgrade of Jindal Steel, but not let their imaginations run away with doomsday scenarios 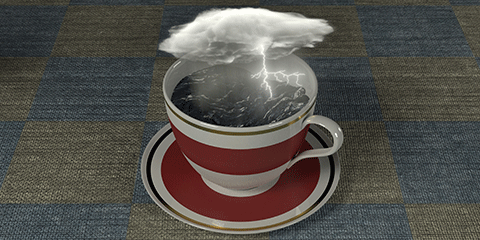 Six months ago, debt fund investors were given a shock when a default by Amtek Auto led to a sudden decline in the NAV of two debt funds run by JP Morgan Mutual Fund. Now, another piece of corporate trouble has roiled investors once again, even though this is a rating downgrade, which is a much milder even than a default. Credit rating agency ICRA downgraded securities issued by Jindal Steel & Power to 'BB+', which is below investment grade. As a result, as per the SEBI-specified valuation norms, these papers' value was marked down and there was a decline in the NAVs of these funds.

These funds were from two fund houses--Franklin Templeton and ICICI Prudential. The decline in NAVs was small--ranging from 0.48 per cent to 1.63 per cent for affected open-end funds. However, Indian investors are not used to any decline at all in debt funds, at least not for reasons of credit quality. Investors assume--certainly, on the basis of actual track record--that debt funds won't suffer any decline in value because of credit quality issues. However, the reality is that not only can it happen, but in an economy where there's a massive overhang of non-performing assets with banks, it's actually a quite good news that out of ₹10 lakh crore of such investments by mutual funds, the scale of credit quality issues has been quite small so far.

Please note the 'so far' with which I ended the previous sentence. Given the situation in many sectors, investors will have to reconcile themselves to the fact that the chances of such downgrades or even defaults, are tiny but not zero. The cure for this problem is not to expect a miraculous level of credit safety, but good old diversification. It's notable that within the funds which were exposed to JSPL, diversification worked well. Only a small proportion of the assets were affected. On top of that, one would expect investors to add their own diversification and not put more than 15-20 per cent of their portfolio in one type of fund or one fund house.

The other thing that investors must do is to understand the nature of the funds and the timeframe over which they are suited. Debt fund investors who want truly negligible risk should stick to liquid funds. It's very tempting for them to invest in funds which have longer durations or have a more adventurous outlook on credit quality, and thus hold out the promise of higher returns. However, the quantum of extra returns is often no more than half to one per cent a year. This is just not worthwhile if your investment is for short durations of less than a year or so. If investors seek out higher risk types of funds for higher returns then they ought to be prepared to bear the risk.

However, as I have pointed out earlier, there is a deeper anomaly in the these type of funds. If some investors panic and run at a slight drop in NAV, they would get an advantage over more sensible ones. In effect, this would be like a run on the fund. What AMCs are doing is to run open-ended funds with highly liquid one day redemption facilities backed by highly illiquid corporate bonds. If, because of some news or event, a relatively large number of investors ask for redemption in such a fund, then the AMC has nowhere to get the money from. The same news would have frozen the underlying market too. Typically, the fund manager would be forced to sell off some of the better (more liquid) holdings in the fund. That would lower the overall quality of the portfolio that is being held by remaining investors. Since fixed-income investors are professionals who would be aware of what's going on, there would be a run on the fund. The cure for this is obvious and yet would be deeply disruptive to everyone from investors to funds to the issuing companies. And yet, it's something that everyone needs to keep in mind.