The opposite side of positive thinking is negative visualisation, and the latter makes more sense for your investment decisions 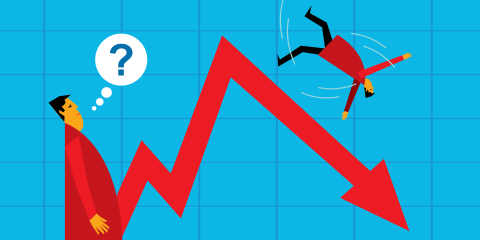 The 'glass half empty or glass half full' way of looking at life is now an age-old, almost clichéd philosophy. We all know that pessimists look at the glass as half empty, but we have been told often times that we shouldn't be that way, we should be looking at it optimistically. We should be looking at what is left, not what has gone. It's the power of positive thinking, you see. Look at the bright side of things, there is always a light at the end of even the darkest tunnel, so on and so forth.

But recent, newer studies suggest that positive thinking might be not as effective as we'd like to believe. These studies suggest that there's a bigger case for negative visualisation, wherein you envision what could and what will go wrong before you begin something. This method has gained ground because there are numerous examples of ambitious undertakings falling flat due to the lack of adequate preparedness.

Negative visualisation helps you stay prepared for things that could go wrong; it keeps your expectations in check and guards you against disappointments. When you're prepared for the worst, you increase your chances of being happy with what you eventually achieve. It, in fact, helps you work with a clearer focus to make sure you don't end up at the worst case scenario. Once you've envisioned that situation, you will naturally do your best to avoid it.

The power of negative visualisation is used largely by businesses, but it can be used fruitfully by investors as well. With your hard-earned money on the line, it makes even more sense to not jump into an investment decision without first properly analysing the pitfalls. Blind enthusiasm doesn't have much of a place in investing.

It goes without saying that an investor should be aware of the pros and cons of the investment he's getting into. More so, the cons. In an attempt to get high returns, you obviously don't want to end up at the wrong end of the stick. A careful assessment of the risks of an investment can help you make a better decision.

This is where negative visualisation helps. If the worst case scenario of an investment is the plausibility of losing a large chunk of money, you'd be better off with something less risky. Makes sense, doesn't it? Ironically, it positively does.