Following Voodoo Economics | Value Research https://www.valueresearchonline.com/stories/28362/following-voodoo-economics/ Given the economic data, the 'hawkish' stance of the RBI looks like a mishmash of bad policy and worse implementation

Given the economic data, the 'hawkish' stance of the RBI looks like a mishmash of bad policy and worse implementation

RBI's policy statement issued early June was a mishmash of bad policy and worse implementation. The policy announced a decrease in 'repo' rate (rate at which the RBI lends to banks) by 25 basis points but talked of higher inflation in a few months and a slowing economy. So what was the governor trying to do? If the fear of inflation is credible - at a time when most industry sectors are functioning at 60 per cent capacity and have no pricing power - what is the need to cut rates? Alternately, if the economy is going to further slow, what would cause inflation in a situation where we are far from full employment. Confused? So it seems is the RBI, but let's have a look into the past.

The story since the collapse of 2008
Since the financial collapse of 2008, readers will recall, the government followed an expansionary policy to help economic recovery. This was also mirrored by the RBI. This continued long after recovery, leading to entrenched inflationary expectations and negative real interest rates (see Graph 1) right through to 2014. In fact, I criticised persistent negative real interest rates in earlier articles; they have led to high inflation, including asset inflation in gold and real estate, while financial assets languished.

Dr Rajan came on as the RBI governor in September 2013, chose inflation targeting as a primary goal of RBI and moved to increase real interest rates. The consumer price index (CPI) was made the focus in policy formulation against the earlier use of the wholesale price index (WPI). This, along with a change of government policy (restricting increase in minimum support price for food grains, among other measures) helped tackle inflation. The governor also articulated a goal to maintain positive real interest rates in the region of 150-200 basis points. Things were seemingly falling into place.

Data driven - indeed?
The June pronouncements - decidedly hawkish in tone - come as a significant surprise, especially since the RBI insisted that policy will be 'data driven'. The pertinent question to ask is 'what data' - real data that all of us can see or some voodoo forecasts that allow Dr Rajan to maintain high interest rates without economic justification. 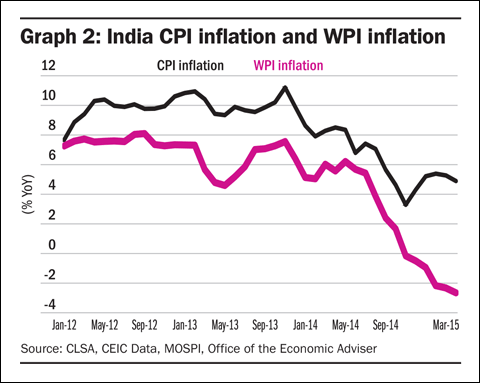 CLSA, in a recent report, points out that real interest rates are 10 per cent if the WPI is used as a deflator. Even using the CPI, real interest rates are close to 2.3 per cent after the cut. This is well over the target that the RBI set for itself. Additionally, if rates are meant to be 'price' determined between a borrower and a lender, bank credit growth is now a paltry 10 per cent, of which credit to industry increased at only 6.4 per cent, while that to the services sector increased by 7.5 per cent. Deposit growth, on the other hand, has recovered significantly, leading to a falling credit deposit ratio. Clearly, there is scope and justification for more aggressive easing - and almost no case for a 'hawkish' stance as the RBI has chosen to take. 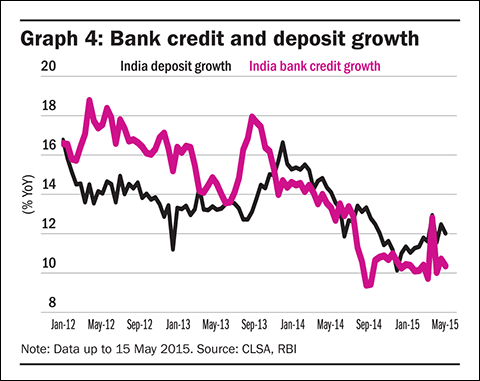 If the argument is that inflation will recur, RBI's own survey of household inflation expectations reveals data that are not consistent with its stated position (see Graph 5). 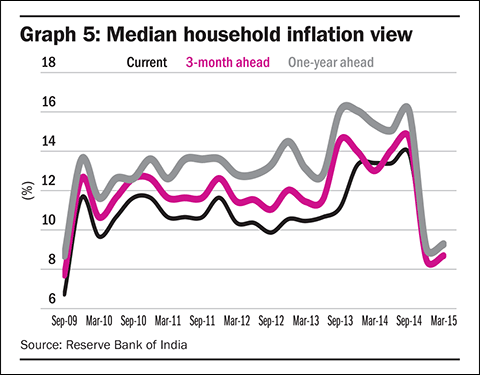 Is it data - or economic dogmatism?
Take a look at the long quote below:
"So Raghuram Rajan has posted a further explanation of his case for raising interest rates in the face of very high unemployment... but what he says only further confirms my sense that we're talking about some kind of psychological desire to be tough, rather than the kind of analysis one would expect from a highly trained economist.

The first thing to say about these two assertions is that they are essentially contradictory. If the difference between current rates and the rates Rajan wants is trivial - just a wafer thin mint - how can that same difference be leading to a major distortion in financial markets? Are we to believe that an interest rate change that matters not at all to firms making real investments somehow has huge effects on speculators? And actually, don't asset prices themselves matter for real investment? Beyond all that, what does Rajan mean by "unnaturally low" rates? What makes them unnatural?
Right now, we clearly don't have enough demand to make full use of the economy's productive capacity. This means that the real interest rate is too high. And so the "natural" thing is for the real rate to fall.

So why does Rajan feel that there must be something wrong with low rates (and he's not alone)? I think his language, with its odd moral tone, is the giveaway: it's the sense that economic policy is supposed to involve being tough on people, not giving money away cheap.

I actually understand the seductiveness of that posture; I can sort of understand how economists succumb to it. But right now, with the world desperately in need of clear thinking, is no time to give in to the subtle allure of inflicting economic pain."

If you think this is the ranting of some industrialist hit by high interest rates, think again. This is a comment made by Noble Prize winner Dr Paul Krugman in his blog on the New York Times, on June 12, 2010, on Dr. Rajan's recommendation to the US Fed to raise rates. It is pertinent to note that the IMF (of which Dr Rajan was once the Chief Economist) has recently requested the US Fed to further postpone increase in interest rates, given the weak global economic growth.

The point to note is that Dr Rajan's seemingly sensible handling of inflation in the Indian context prior to this policy may have less to do with doing what data dictates and more to do with his dogmatic desire to follow a 'tough' monetary policy. For the RBI to fear rising inflation in a context of high unemployment in the economy and use that as an excuse to not cut interest rates to a more rational level makes economic recovery significantly tougher to achieve. At this stage, all that one can hope for is for a dose of reality, not dogma - exactly what the RBI publicly espouses! 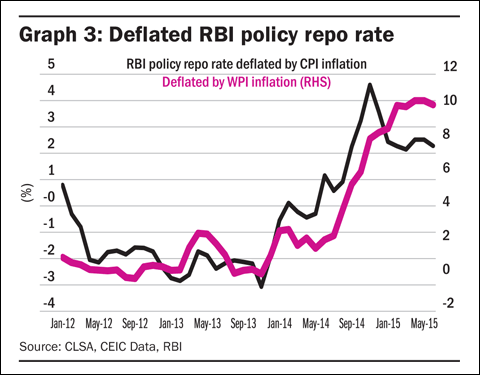 This column appeared in the July 2015 Issue of Wealth Insight.