National Pension System Takes Off | Value Research https://www.valueresearchonline.com/stories/28169/national-pension-system-takes-off/ After the latest Budget provisions and adoption of the NPS by central and state governments, the NPS is witnessing steady inflows

After the latest Budget provisions and adoption of the NPS by central and state governments, the NPS is witnessing steady inflows

The Union Budget provided an exclusive incentive for investment in the National Pension System (NPS). Over and above the Section 80C entitlement, investors can now invest ₹50,000 with tax exemption under Section 80CCD.

The Pension Fund Regulatory Development Authority (PFRDA) has also made key changes in the liquidity provisions. Now investors will be allowed to withdraw up to 25 per cent of the contribution for purposes like higher education and marriage of children, purchase or construction of own house, or treatment of illness of self or spouse. However, this can be done only after completing at least ten years. Also, an investor can make a maximum of three withdrawals in his accumulation phase, with a difference of five years between two consecutive withdrawals.

Also, a closer look at NPS data reveals a dramatic rise in the number of subscribers and the assets under management in various plans. As on March 31, 2015, the total NPS assets were ₹80,855 crore and the number of subscribers was 87.64 lakhs. The NPS has gained substantially on account of mandatory monthly contribution from all central government employees who joined service on or after April 1, 2004. All state governments, barring West Bengal, which chose the NPS for their employees are also covered in the system. With a relatively young subscriber base, for nearly twenty five years, the NPS will continue to accumulate subscribers' contributions without any significant outflow.

The following graphs clearly illustrate the success of the government's efforts in attracting investors' attention towards the NPS.

The impressive growth numbers of AUM and subscribers make us wonder that since all this money is locked in for a very long period of time, we can hope to see a mammoth size NPS AUM several years down the line. 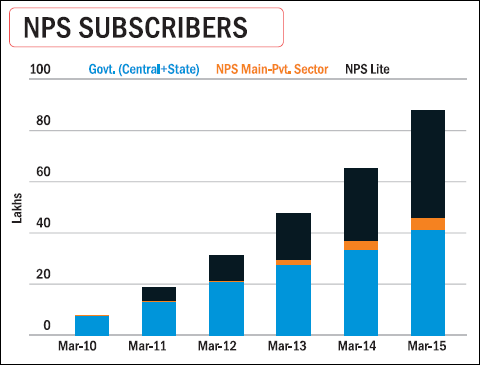 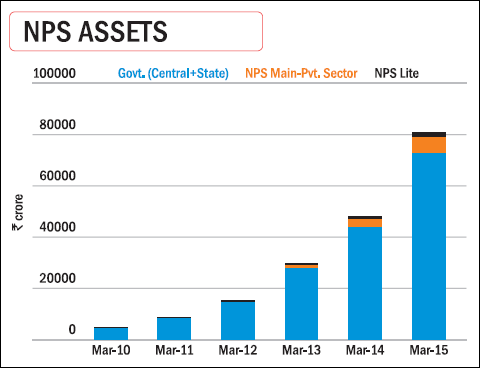