The change in long-term taxation rules for debt funds has caught investors in a bind, making them dump FMPs

The above-mentioned outflow of money has occurred due to the change in taxation rules for debt funds. The Interim Budget 2014 radically changed debt fund taxation rules. Earlier gains from debt funds were treated as long-term gains with indexation if they were held for at least one year. Now gains from debt funds are eligible for long-term capital gains treatment with indexation only if they are held for at least three years. This had a major impact on investors of fixed maturity plans (FMPs) as they faced unexpected tax liability on the maturity of their debt funds. To avoid this, fund companies rolled over maturing FMPs for a total of three-year term. However, many investors preferred to withdraw their investments, as exemplified above.

The change in taxation rules for debt funds also led to the shutting of 72 FMPs. This is because due to high redemption they were no longer compliant with the Sebi's 20/25 rule. The 20/25 rule states that an MF scheme must have at least 20 investors and no investor should hold more than 25 per cent of the AUM.

Many investors would have chosen to redeem their FMP investments based on their needs. However, for them also the outcome isn't rosy. They will have to include the gains from the FMPs to their taxable income and pay tax on them as per their tax slabs. This will leave them with an unplanned tax bill. 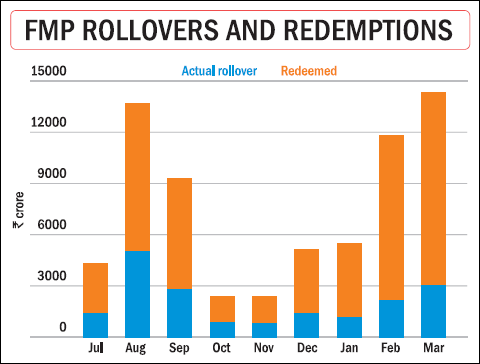