Giving Wings to Wheels | Value Research https://www.valueresearchonline.com/stories/28042/giving-wings-to-wheels/ Shriram Transport Finance is a major player in the pre-owned commercial vehicle financing segment and is poised to grow with the economy

You want to buy a second-hand truck. The one name you can bank upon for financing is Shriram Transport Finance Company (STFC), one of the largest non-banking finance companies (NBFCs) in India. The reason why the company has grown over the years and become a preferred name in its domain is its penetration into a market segment which was completely ignored by formal financial institutions. The company now boasts of 719 branch offices and 672 rural centres.

Imagine a person buying a second-hand truck. Now, who will lend him? Banks will obviously be reluctant, and this is where STFC comes into picture. The company visualised this gap in 1979, and since then it has been a niche player in the commercial vehicle financing segment and has grown aggressively. The company started lending to small truck owners for new vehicles, but as it grew its experience in the domain, it started lending for second-hand trucks as well. A truck usually changes ownership three-four times during its life before being scrapped, hence making the company's business more viable. STFC has a market share of around 25 per cent in the pre-owned segment and 2-3 per cent in the new truck financing market. 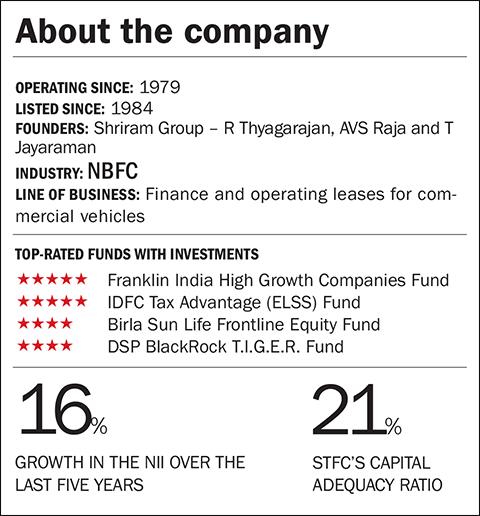 The company has managed its asset-and-liability side well and has a strong relationship with 73 Indian banks for funds due to its credibility. This is partially because banks are reluctant to give loans to the pre-owned commercial vehicle (CV) financing segment directly, but they are willing to do so through NBFCs because CV financing falls in the priority-sector lending category, thus keeping the cost low for STFC. The company has sustained a very tough time post 1998, when many NBFCs fell and the RBI tightened regulation on capitalisation. STFC was able to strategically raise capital when others were fighting to even survive. Other major initiatives which helped the company thrive in later years were starting of securitisation of loans in 2000. Citi Corp and UTI later on provided the much-needed capital.

Growth drivers
The major concern of the company in the last few years has been the slowdown in the loan book due to a snail pace of growth in commercial vehicles. With the economy forecasted to get back on track, commercial vehicle sales have started showing positive growth. They picked up in the last few months and the company is all set to exploit the opportunity. Moreover, currently the pre-owned truck market is crowded with unorganised financiers, thus leaving more room for the company to grow.

STFC's liability side looks good for now as almost the entire loan book is on a fixed rate of interest, whereas 40 per cent of the borrowings are on a floating basis. As per the current monetary policy, interest rates are expected to ease from here and hence will improve STFC's margins significantly. In order to further lower down the cost of borrowing, the company is lowering its dependence on banks because of the lower wholesale debt cost.

The company's major operation is based in South India but it has now also started focusing aggressively on northern and eastern India, especially on tier-II and tier-III cities. Moreover, it is also looking forward to escalating its revenues from related businesses through its subsidiaries. STFC, through its subsidiary Shriram Automall India, acts as marketplace for old commercial vehicles, where buyers and sellers meet to facilitate sales. With this facility, STFC also pitches those sales with its financing products. Other business that it has started is of financing construction equipment, which will provide a cushion to it in the case of a slowdown in the CV segment.

Light commercial vehicles (LCVs) are an attractive market to explore. It is going better than the heavy commercial vehicles (HCVs) segment. STFC is focusing more on this segment. Two more causes for slowdown in CVs were mining bans and slow progress in the sector. With the clearance of the mining act, revival in the mining sector is anticipated, which will improve financing to the CVs in mining. Similarly, the current low level of the securitisation business (off-book financing) is all set to improve as the demand from banks improves. Concerns
STFC's area of financing, which is commercial vehicles, is directly linked to the state of overall economy and hence is somehow related to the growth in GDP. Therefore, any impact on the growth of the economy may also hamper the growth of the company and put pressure on the quality of the assets.

On the liability side, the concern is that the company lends on a fixed rate but borrows on both fixed and floating rates. Given the current economic scenario, this will be positive in the near term, but in the long term it may worsen the company's margins if the RBI starts tightening of the monetary policy. Tightening of the monetary policy means the RBI increases the interest rates, hence escalating the cost of borrowing. The company, however, cannot pass on the burden in the short term due to lending on fixed rates.

Investors should also keep a constant check on the quality of assets or the loan book as its gross NPA (non-performing assets) have worsened by 95 basis points in the last three years, from 2.64 per cent in FY11 to 3.59 per cent in Q3FY15. On the other hand, the silver lining is that it has improved from the previous quarters and the provision coverage ratio is very healthy at 80 per cent of the gross NPAs.

Financial
The loan book has grown by a moderate 8 per cent CAGR over the past five years but net interest income has grown by 16 per cent over the same period. STFC's capital adequecy ratio is strong at 21 per cent as on December 31, 2014, as against 15 per cent required by the RBI for NBFCs. Net interest margin averages to 6.57 per cent in the last four quarters.

Valuations and outlook
At current valuations, the company is trading at a price-to-book multiple of 2.64 times, which is around 5 per cent discount to its ten-year average level of 2.77 times. However, the stock is fairly valued, given the historic level. The company is poised to take full advantage of the reversal in the cycle of the commercial vehicles along with improvement in the overall sector. Buy.