Inverted Thinking for a Deflationary World | Value Research https://www.valueresearchonline.com/stories/27807/inverted-thinking-for-a-deflationary-world/ Living in a deflationary world (or, in the case of India, a disinflationary world) is like waking up underwater, where even the way of valuing equities is different

Inverted Thinking for a Deflationary World

Living in a deflationary world (or, in the case of India, a disinflationary world) is like waking up underwater, where even the way of valuing equities is different

You know it when you try and open your eyes underwater. The first thing you notice is that you can't breathe, and that gives you limited staying power. Even if you can still think clearly (for example, if you are attached to an oxygen tank), you can't see straight because the refraction of light in water distorts your vision.

Living in a deflationary world (or, in the case of India, a disinflationary world) is rather like waking up underwater. For starters, you have to adjust your inflationary expectations. At 25 years of age (and almost all the time thereafter), we look forward to 'higher earnings'. Almost my entire working life, wage inflation has stayed above 10 per cent, and higher salaries have paid off debt burdens. What we thought was higher earnings was really nothing but wage inflation. Our sense of 'performance', where we got used to getting a higher pay for a 'redesignation' (which we called a promotion), was measured by the size of our pay hikes.

All this will change to a more 'truthful' world, which will demand higher levels of (economic) intelligence from the ordinary citizen. Many of our old filters will fall away as we move to a different world. Some of them I will recount below: 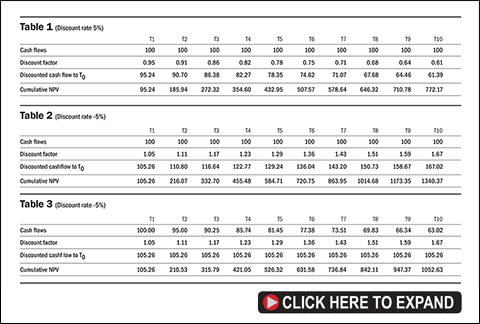 Now what happens if the return rate is negative, i.e., interest rates are negative? This can happen in a deflationary world, as the Swiss National Bank has very spectacularly shown. If your flow of returns turns negative, what happens to your NPV?

Considering that the discount rate in your mind is still a positive number because you still live in Alice's 'real' world on this side of the looking glass, you would get a negative number as the NPV. But in the world of Tweedledum and Tweedledee, you will have to discount the negative cash flow by a negative discounting factor, which is derived from the negative interest rate, which comes from working backwards from a deflationary environment. Can you imagine how Alice felt in her Wonderland world? This negative divided by a negative would give you a positive (corpus), which brings you back to your real world on this side of the looking glass. This is illustrated with the three tables below.

In table 1, you have the normal situation prevailing in today's world, i.e., all cash flows are discounted to T0. The cumulative NPV of a ₹100 cash flow for ten years at a discount rate of 10 per cent comes to a healthy ₹772.

Most businesses, however, will lose margins in a deflationary environment. See table 3. Let us assume that a good-quality business will be losing margins at the same rate as deflation. Notice that in 10 years, cash flows have dropped by 37 per cent (from 100 to 63), but the NPV has dropped by only 22 per cent, from ₹1,340 to ₹1,052. That is just about 2 per cent in a deflationary environment that is running at -5 per cent in a company losing margins at 5 per cent. In moderate deflation (like the kind faced by Japan), there is no impact on net economic welfare. This is what we see in Japan, where per capita indicators of economic welfare have not done badly at all because productivity gains have made up for deflation.

Now let us try the mental calisthenics that are needed to live in a deflationary world.

Right now, when you think of returns, you have a mental image of a large pot of cash (worth ₹100) that is your corpus. We 'invest' this at the beginning - the simplest form of such an investment being a bank deposit. There are other, more sophisticated models (like insurance), where the corpus is invested later, and the returns sometimes come earlier.

Now think in terms of flows. Your earnings are a flow. Suppose this is a salary flow we are talking about. Now, if you had a negative discount rate, a future flow would be preferable to a current holding of cash. That is the meaning of negative interest rates. So, the same amount receivable in the future is actually more valuable than cash in the bank. You worry that the cash in your bank is being eaten away at the rate of, say, 1 per cent per annum. So, you go and put your money in a government bond that pays, say, 0.01 per cent interest. At least it preserves your cash and gives you money receivable in the future with some safety and security. Your actual return from the bond is the 0.01 per cent cash return plus the opportunity loss of minus 1 per cent saved, i.e., you get a return of 1.1 per cent, which isn't so bad. So Japan's zero interest rates are not bad in a country with deflation of -1.2 per cent or so.

Or you spend the money, preferring to consume it now than see it rot away. Or you put the money int a sustainable business with low debts so that you get tomorrow's cash flows.

All this sounds sensible, but remember, what you want to do is exactly the opposite. You expect prices to fall, so you want to delay consumption, not advance it. That is why the Swiss National Bank's actions are unprecedented. They have created an environment of negative interest rates, which create a bigger disincentive to holding cash. This should get the velocity of money back to 'normal' levels and create some inflation.

The way you would value equities in a deflationary environment is also very different. Normally, we look for a high return on equity (ROE), which happens when you make a 'spread' over the cost of debt. So, a company should have a high return on capital employed (ROCE), make a healthy 'spread' over the cost of debt and hence leave shareholders with a high ROE. But in a deflationary environment, margins drop disproportionately, ROCE falls and the survivors are the companies with low debt. For example, the sugar industry has seen a 30 per cent increase in input costs with a 7 per cent drop in sugar price realisations, a good example of what happens in deflation. Now, in this environment, high debt players like Renuka Sugars/Bajaj Hindusthan have got decimated, while the likely survivor will be the low-debt Balrampur. By the time the industry emerges again from its deflationary spiral, the latter will be a very strong company in an industry weakened by persistent deflation. Supply has to fall to balance inadequate demand, and this will come from bankruptcies, which will happen in the high-debt players.

So in a context like this, you look for low debt and survivability, and you discount future cash flows as more valuable than current cash flows. Most investors are not able to see things that way, and that leaves some hidden gems for value investors.

This column appeared in the April 2015 Issue of Wealth Insight.