The Engines of a Growing Economy | Value Research https://www.valueresearchonline.com/stories/26291/the-engines-of-a-growing-economy/ The capital goods space was one of the biggest beneficiaries of the Budget, which could provide the much needed push for fresh investments

The Engines of a Growing Economy

The capital goods space was one of the biggest beneficiaries of the Budget, which could provide the much needed push for fresh investments

Capital investments are the engines for any sustained growth in the economy. The Government recognises the role such investments play. As such, the capital goods space was one of the biggest beneficiaries of the Budget that allowed companies investing in plant and machinery an extension in investment allowance and has extended the 10 year tax holiday to power utilities. This could provide much needed push for fresh investments especially in plant and machinery.

The Budget also sought to bring down the limit of investment in machinery for the eligibility of 15 per cent investment allowance from ₹100 crore to ₹25 crore-another major score for plant and machinery manufacturers.

Capital expenditure of public sector units, a major source of business for capital goods manufacturers is slated at ₹2.5 trillion for this financial year alone. That's many doors of opportunities opening up for the sector.

BHEL
If you are looking for a quick-buck capital goods stock, BHEL is not it. But here's why you should consider BHEL. It is the country's largest power equipment manufacturer with more than half of the total installed generating capacity in the country that churns out close to 70 per cent of its power.

Besides, there is nothing wrong with BHEL's products. It is one of the best in its sector. What ails BHEL is the slowdown in power generation. Not much fresh additions have taken place in the last couple of years. A sluggish economy has kept demand low negating the need for fresh investments in the sector. Many analysts project low supply addition to continue.

In realty, the country is slated to see 50 per cent capacity addition by 2017. Yes, the sector still has many issues to resolve - coal shortages, environment concerns, law and order in mining areas, better rail connectivity before things start moving for BHEL. That will take time - longer than many investors would be willing to wait. Only for those investors that can buy and wait. 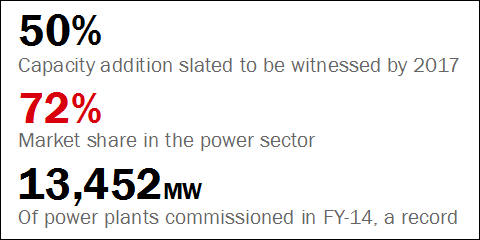 Cummins India
The Cummins India management senses a change in the air. The market leader in high and medium HP engines in India, Cummins has raised current year guidance from 5 per cent levels to 10-15 per cent. Exports are looking up and high HP engines are expected to log in better growth this year. Slowdown in the domestic power generation too has bottomed out and is expected to see growth this year.

Exports are driving Cummins' sales at a time when domestic is languishing. Exports were up 41 per cent over the previous year in the June 2014 quarter. Cummins estimates exports to grow by 30 per cent-up from earlier estimates of 10 per cent. This, primarily on sales of low HP sets that have taken off.