Striking at the Right Moment

Investors across the world have faced the time versus timing debate. Time spent in the market having become the undisputed and sure shot way to make money. For the risk averse, time, and not timing is the best recourse, for those willing to take some risks with their investments, timing could be the key to huge returns.

Fund managers are seasoned investors who are adept at knowing when to enter and exit a stock, which is of course one of the reasons mutual fund investors pay them a fee for. Experienced fund managers use market timing as a strategy by which they identify the best times to be in the market or in a stock and when to get out. In recent times, this facet of fund managers was there to see, especially when we analysed the fortunes of the Wockhardt stock.

The past one year was a traumatic period for Wockhardt. The USFDA declared its manufacturing facility unfit, leading to ban on exports to the US, which resulted in the stock being hammered on the bourses. The stock, which was trading at ₹2,100 in March 2013 did a dead drop to touch a low of ₹340 in December 2013. In about nine months, the company wiped off 85 per cent of the shareholder's value. Naturally, mutual funds pressed the panic button and exited en masse.

White knight moment
Among AMCs that had investments in the Wockhardt stock, all but HDFC smelled an opportunity to make a killing. The AMC timed its acquisition by slowly increasing its holdings in the stock. The conviction on the quality of the company was the primary reason for increasing stakes in Wockhardt. HDFC AMC, started accumulating the stock in the ₹300-400 range. The upside: Wockhardt stock has gaining almost 60 per cent in a short span of two months. While this is a classic case of value opportunity buying, it is actually timing the investment that resulted in the AMC increasing its holding in the stock from zero holding in Jan 2013 to almost 2 per cent by March 2014. This is one instance when timing the market as a tactical move proved its effectiveness. Of course, what others AMCs lost out of fear investors in HDFC Mutual fund gained. Investors in funds that had investments in Wockhardt would have a lot to smile about given the benefits from this tactical move. 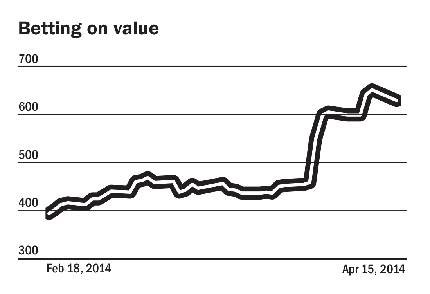 Axis Mutual Fund was perhaps the only AMC, that did not change its holdings in the stock in the entire period.