Thriving on Market Share | Value Research https://www.valueresearchonline.com/stories/25092/thriving-on-market-share/ AIA, the leading mill internal manufacturer in India has the necessary expertise and offerings to make it big

AIA, the leading mill internal manufacturer in India has the necessary expertise and offerings to make it big

AIA is the second largest high chrome casting producer in the world, with Belgium based Magotteaux, being the largest producer. The company manufactures grinding media, liners and diaphragms which are collectively known as Mill Internals. These are used in crushing and grinding operations in cement, power utility, and mining industries. AIA Engineering was incorporated in 1978 as Ahmedabad Induction Alloys. In 1992 AIA Magotteaux Pvt. Ltd was formed as JV between Magotteaux and AIA, ended in 2001 and the company got renamed as AIA Engineering and later listed in 2005. In India, AIA has a share of 90 per cent of the domestic cement sector, around 70 per cent of its thermal utilities sector and 25 per cent market share globally. 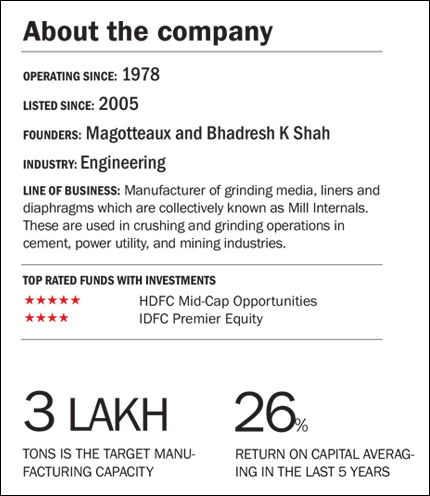 Strengths
High chrome mill internals do not have high entry barriers in terms of technology. In spite of this limitation, AIA has become the de facto monopoly player in the domestic cement industry and a dominant player in the mining sector. AIA managed this by creating a competitive advantage for itself in the services that it provides to its customers-high and consistent quality of products, uninterrupted supplies, undertaking mill audits, client specific design, undertaking installation and continued servicing and maintaining well developed relationships with its clients. 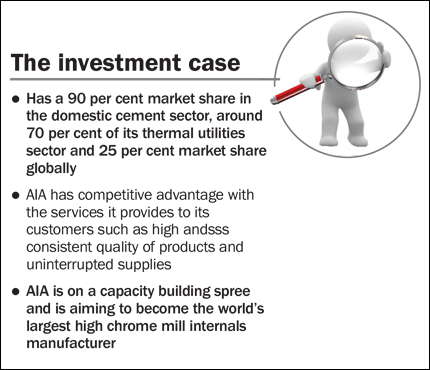 Growth drivers
AIA specialises in high chromium mill internals that have significant advantages over traditional forged components. High chrome components are more durable and are more resistant to corrosion. Take grinders used in zinc mining; the high chrome grinder produces consistent ore particle size, has a higher recovery rate of the metal and reduces wear and tear by as much as 40-50 per cent leading to long term cost savings for the client.

Moreover, replacement demand for high chrome mill internals is estimated to account for around 85-90 per cent of the total demand. The reason why replacement demand remains so high is not reflective of the quality of the internals used. Rather it is a function of the process that causes such high degree of wear and tear which makes components to be replaced frequently. Take grinding media for instance which needs to be replaced every 30 days. Grinding media accounts for around 80 per cent of the total replacement demand. Such a high degree of demand therefore creates a steady flow of income visibility for players of the sector and AIA in particular.

The global cement consumption is expected to grow from 3,750 million tonnes (CY12) to 4,442 million tonnes by CY16. According to ICICI Securities this translates to an annual growth in demand of 4.3 per cent. Replacement demand is expected to grow 3.2 per cent in the same period. Domestic demand is expected to remain stable with an annual growth of 6 per cent between FY13-16. Capacity addition during this period is estimated at 17 MT which is likely to create a replacement demand of around 35,000 tonnes by FY16.

Concerns
Capex programme to impact free cash flows; the company's capex programme to raise capacity to 440,000 tonnes by FY16 will not be without its consequences. Although the ₹1,000 crore capex is expected to be largely funded by strong operating cash flows estimated at ₹800 crore (Ambit estimates), cash and investments of ₹370 crore and an additional debt component of ₹150 crore free cash flows will be a casualty. Free cash flows are estimated to fall into red (Ambit estimates) for FY14 and FY15 before turning around in the following year.

AIA has no competitive advantage in terms of the technology of its products. Its competitive strength lies on the services that it provides, the durability and dependability of its products and the relationships it has cultivated over the years. A bigger competitor Magotteaux has not been able to breach those advantages and it explains AIA's stranglehold in the domestic market. But the company will continuously need to up-the-game for itself.

Financials
As AIA ramped up capacity in the last couple of years, revenue growth has been fast at around 23 per cent annually in the last three years. Revenue growth is expected to average between 17.4 per cent (ICICI Securities) and 22 per cent (Ambit) between FY15-16. Growth in earnings per share is estimated to average between 36.75 per cent and 40 per cent respectively during the same period.

Valuations
AIA trades at 19.4 times its trailing twelve month earnings. The company's dominant position in the limited competition high chrome mill internals market and its largely internally funded capex programmes will boost earnings growth in the next few years and keep AIA on a momentum.