Axis Mutual Fund's new small-cap fund is low on liquidity and track-record, but could be of interest to adventurous investors who'd like to take a call on a broad-based revival of equity markets over the next five years.

For the purpose of this fund, 'small-cap' has been defined as those companies whose market capitalisation is less than the value of the largest company in the CNX Smallcap Index. Currently, this means a market cap of about Rs 3,300 crore. It's good that this is not a hard value defined in rupees crore. As the market moves up or down, it will adjust accordingly. This is the same principle that is followed in Value Research's equity fund classification system.

Small cap investing is always more volatile than large-cap investing. A smaller company can grow faster, or decline faster. It can take advantage of a changed business situation better and grow rapidly, or be unable to cope with changes and decline rapidly. Something similar happens at the level of their price movements in the stock markets. A smaller company will typically have a relatively lower trading volume and a smaller number of traders interested in it. This means that any given piece of news, positive or negative, can affect its stock price much more sharply than an equivalent news would a large cap stock. It also means that much less research attention is paid to these stocks. For an investor, this boils down to higher potential gains, and higher potential losses. In other words, returns with risk. The fund manager of a small-cap fund has a far tougher job where the risks are that much higher.

The accompanying graph shows how volatile the small cap end of the market is compared to large-caps. 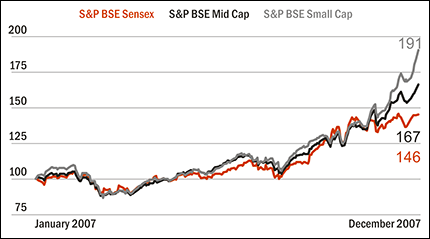 This is a closed-end fund with a five year term. During these five years you cannot redeem from the fund house. The fund will be listed on the equity markets and if you need to pull out, you'll have to do so at whatever (if any) deal you get at the market price.

If you want to invest in small caps but don't want a fund without a track record, take a look at the accompanying table 'Small Cap Alternatives'.

A fund like this can be a good investment but as we said the risks and the potential rewards are both high. You should take a call based on your personal evaluation of the factors we have discussed above.