New fish in the sea | Value Research https://www.valueresearchonline.com/stories/23033/new-fish-in-the-sea/ Analysing recent IPOs and how they’ve panned out...

New fish in the sea

Analysing recent IPOs and how they’ve panned out...

After three years of downward trend in the number of IPOs, the primary market came back into action with 13 IPOs in the first four months of 2013. But even though the number of IPOs increased, the total amount of money raised was just `471.1 crore.

The IPO Index had shown superb returns compared to the Sensex in the previous calendar year but took a steep downturn in the last few months with the IPO companies giving substandard returns. Returns in the past 1 year stood at 5.87 per cent for BSE IPO as compared to 21.43 per cent by the Sensex.

From the given list, Opal luxury Time Products has been listed on EMERGE; the SME platform of NSE. Further, there are two companies; Just Dial and OneSource Techmedia which came out with their IPO last month but have not been included. 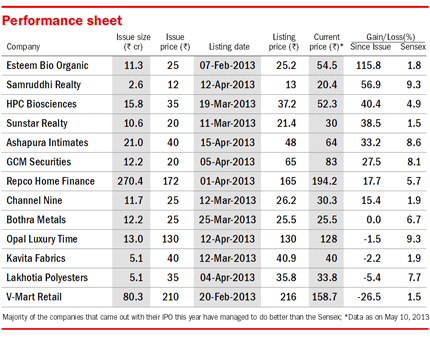