No method to madness | Value Research https://www.valueresearchonline.com/stories/22939/no-method-to-madness/ Three companies whose stock is skyrocketing for no reason...

No method to madness

Three companies whose stock is skyrocketing for no reason...

Our markets have seen a lot of ups and downs in the last 6 months. The Sensex went from 18,713 points to a high of 20,103 in the beginning of the year and then fell as much as 9.3 per cent to reach a low of 18,226 in April 2013. One would believe that this topsy-turvy change in fortune would have impacted all the companies, i.e., affecting their share price and book value. But, that doesn’t seem to be the case.

There are 8 companies (the full list is there in the table below) that have stood still amid the market fluctuations and are going about their growth march unperturbed.

Divergent paths image here
Upon close observation, it emerged that 3 companies from that list don’t have strong fundamentals to fall back on and there is nothing but speculation behind their fantastic run.

What’s common among all the three is that they all have a small shareholder base, ranging from just 570 to 1,280. The median total shareholders of all traded companies with a market cap of Rs 500 to Rs 1,500 crore stands at 18,537 and among all, there are just 20 companies which have less than 1,500 shareholders. These three also don’t have any subsidiaries, a holding of which could have rationalised the high share price. Here are these companies:
NCL Research & Financial Services

The company is in the business of trading of textile products as well as investing in shares and securities. It has a total income of just Rs 88 crore on a TTM basis and a profit of Rs 88 lakh. The market cap of the company though is following a pattern unknown to others as within the last 3 years it has multiplied by a tremendous 35 times.

The company was initially known as TCL Technologies. It was taken over by new promoters in 2010 and got into the infrastructure business and later was renamed Aricent Infra. The share price has since gone from a low of Rs 0.5 to a high of Rs 205. A whopping 410 times.

The company, contrary to the name, is actually a finance company. It is one obscure company with no information regarding its operations but its share price has gone up 56 times in a little less than 18 months. The promoters of the company have consistently reduced their stake in the company going from 51.19 per cent to 27.58 per cent. 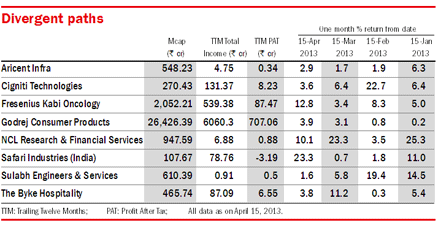