Leading the Innovation Curve | Value Research https://www.valueresearchonline.com/stories/22842/leading-the-innovation-curve/ Innoventive Industries' current discounted price makes it an attractive buy as the industries it caters to will bounce back...

Innoventive Industries' current discounted price makes it an attractive buy as the industries it caters to will bounce back...

IIL made its debut on exchange recently after its IPO in May 2011. Some of the key customers of IIL are Bajaj Auto, BHEL, Arcelor Mittal, Welded Tube of Canada, Volvo-Eicher. IIL has five manufacturing facilities spread across Pune and Silvassa.

Strengths
The key strength of IIL is its patented products which give it a cost advantage over others. This advantage helps the company in not only maintaining superior operating margins and profitability but also produce a better quality product. It is also developing new products under a new manufacturing, further sharpening its edge over peers. 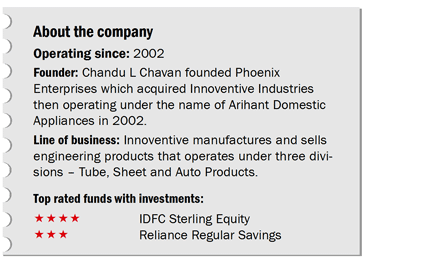 The government of Maharashtra granted 'Mega Project' status to its plant located at Pimple Jagtap in 2007. The status gives an access to benefits like Industrial Promotion Subsidy in the form of VAT refund equivalent to 75 per cent of the eligible investment made in the plant. Importantly for the company, in FY-12, the eligible investment limit granted to the company was raised to Rs 562 crore and the tenure to receive this VAT refund was increased from 7 years to 9 years. 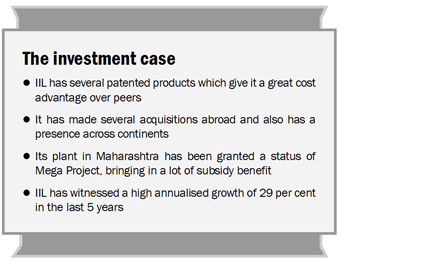 • The company has made strategic acquisitions that have helped it spread its wings in two key overseas markets of the Americas and the Middle East. First, it acquired Sankalp, one of the largest manufacturers and exporters of couplings for oil and gas exploration industry in India. Second, it acquired its overseas customer, Salem Steel, which is also a supplier of seamless tubes across North America

Growth drivers
IIL constantly seeks to upgrade its products and also come out with newer ones. In the last two years, it has launched three new products. There still remain a few products which have been developed but haven't been introduced. One of them is bimetallic CEW tubes for which the company has also filed for a patent; it has a huge potential in the furniture industry. The other such product in the pipeline is bearing spacers which find application in wheels of heavy vehicles. IIL has the cost advantage due to its indigenous technology and expects to introduce it in the market soon. It has also managed to rope in customers such as VE Commercial Vehicles and Mahindra Navistar for the product.
• IIL has expanded its capacity and plans to further expand it by funding from the IPO. The company plans to reach a capacity utilisation of 76,701 MT in tubes and allied products which is currently at 53,232 MT
• After the acquisition of its own customer Salem, the company plans to further acquire marketing and distribution companies in overseas and Indian markets to boost exports of tubes and oil and gas related products. Its product 'coupling' is witnessing rise in demand as global oil and gas industry is reaching newer depths (pun unintended)
• IIL has presence in US, Canada, Germany, France, England, Middle-East and Latin America. Further, the company intends to strengthen its presence in Europe and other unexplored market by leveraging upon its incorporated 'Innoventive Industries UK Limited' in London, UK 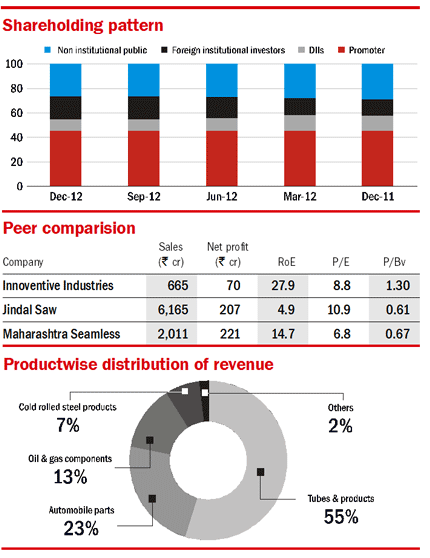 Concerns
One of the key challenges which the company has to address is its working capital requirement because its businesses are very working capital intensive. Another concerning factor is that IIL has to manage its inventory as the inventory days are as high as 100 days. This is quite high as adequate inventory needs to be maintained to meet just-in-time requirement of clients.
• Components manufactured for the automobile sector contribute 22 per cent of the total revenues and those for oil and gas 12 per cent. Both the industries are very cyclical and automobile industry is struggling currently. Any prolonged downfall in these sectors can impact the top-line of the company
• IIL derives its benefits from various subsidies and grants from the government. These benefits are subjective to uncertain political decisions and environment. Given such a scenario, any premature withdrawal of these benefits can change the picture for the company
• ILL face huge competition in the overseas market in the tube segment from companies such as Arcelor Mittal, Metal Matic, US Steel, Tenaris, etc. Meeting the challenge will require regular efforts in product innovation which also requires constant outflow of funds

Financials
IIL has witnessed a high annualised growth of 29 per cent in the standalone revenues over the last 5 years whereas earnings have grown by annualised rate of 67 per cent. The company has improved its margin with this kind of growth in revenues from 2.9 in FY07 to 10.5 in FY12. Return on net worth averages to 35 per cent and return on capital is 23 per cent. Payable days have fallen and receivable days have gone up which is not favourable as it tightens the working capital requirements.