Spoilt by technology | Value Research https://www.valueresearchonline.com/stories/15899/spoilt-by-technology/ How technological advancement has changed the conception of knowledge How technological advancement has changed the conception of knowledge 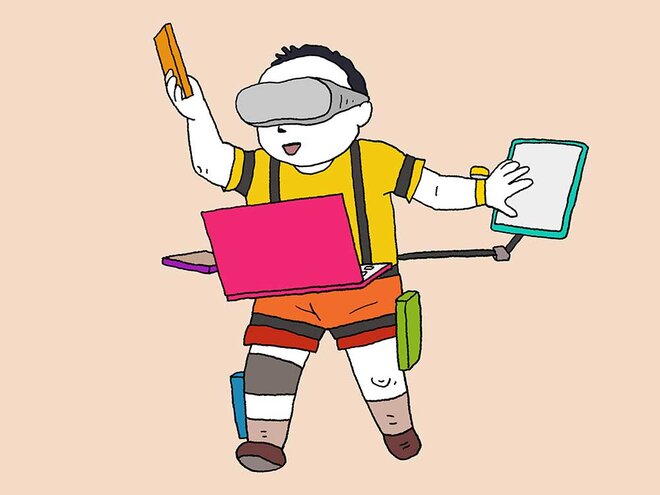 Every day I watch my grandson make a big racket as he leaves for his school. He looks more like a paratrooper than a schoolboy with a big satchel on his back and his packets full of assorted items ranging from a mobile to an electronic calculator. What he does with them I do not know but he is unable to answer a single question correctly, from India's GDP to Sachin Tendulkar's latest score, though he has them all on his laptop.

We had no satchels and of course, no laptops when we went to our first school which was not much of a school as schools go. I was four or five years old at the time, we lived in a small village and our teacher was also the priest in the temple. Actually, the temple served as a school, there was only one teacher for the entire school and the poor man also doubled as a sort of an accountant for my uncle who used to ask him to count coconuts after the harvest and keep an eye on mangoes.

But we had no difficulty in learning our three R's. There were no benches and we squatted on gunny bags that my uncle had kindly donated to the school. The school provided shelter to village cattle, particularly in the rainy season and our first job every morning was to shoo them out of the temple, not an easy job considering they were much bigger than us. It was only after the cows departed that our real work began.

But don't think it was all a waste of time. We learnt a great deal, including adding and subtracting and learnt our sums by heart. To this day, I can do sums which many computers can't. And I do them all in a sing-song fashion and the results are always correct, to the great surprise of my friends from Cambridge and Harvard who are lost without their laptops.

I am not an exception. Once I saw the great Dr Bhabha do his sums in Gujarati, his mother tongue, though he had a battery of computers on his table. I do my sums in Konkani, the only language I am comfortable with and the results are correct to the fourth decimal point or maybe the second.

The teacher was a one-man band. He taught everything to everybody - arithmetic, history, geography, even music, which sounded strange to my tone-deaf ears. He could draw pictures and maps on an improvised blackboard and recite dialogues from old historical plays. How he did it, we do not know, for he also kept accounts and a complete list of my uncle's unfortunate clients, most of whom, he said, were cheating on him.

We had only one book, a kind of a primer, with a little bit of everything, from animal stories to Maratha history and of course, all kinds of pictures, including one of Queen Victoria who had died long before, but the author was a little behind time or maybe he had a crush on the old queen. We used to have plays, too, most of them invariably about ancient heroes, which drew the entire village to the school and for a while, we became celebrities and lorded it over the rest of the crowd.

We had, of course, no calculators or for that matter, very little of everything, but that didn't prevent us from doing complicated sums. Years later, when I went to London, this surprised my teachers, John Maynard Keynes among them, who thought this was some kind of a Hindu trick, like the spiritual sleight-of-hand pulled by Gandhiji when he wrested India from the British. I can still do sums without calculators, though even the local grocer needs one to add two simple items.

Now the school has a proper building and students wear natty uniforms supplied by the government and carry bulging satchels and discuss Einstein's relativity as they tuck into their pasta and swig their cokes. But ask them to multiply 29 by 9 and they look blank. No wonder we have not produced a single Ramanujan after the last one passed away in 1920.