Patience is a Virtue of a Winner | Value Research https://www.valueresearchonline.com/stories/11748/patience-is-a-virtue-of-a-winner/ Indian investors need to look at the long-term horizon while investing in companies undertaking M&As

Patience is a Virtue of a Winner

On the day when Corus' shareholders approved the $12.3 billion takeover bid by Tata Steel, the latter's share prices touched a low of Rs. 399. Later, when Ratan Tata, Chairman of the Tata Group, was asked a question regarding this, he said, "We often damn a company when it makes a loss in a single year. We applaud a company when it makes an extraordinary profit. But the life of a corporation is much longer than a single year..." These might just be the words of wisdom that Indian investors need to heed. Why? Because the Indian investor is invariably impatient, especially when it comes to companies caught in an M&A crosshair.

Share prices biting the dust whenever a big-ticket acquisition is announced is nothing new. It has happened with Tata Steel, Hindalco and Suzlon amongst others in 2007. And this year, we saw it happen to Bharti-Airtel and Reliance Communications in the race for acquiring South African Telecom company, MTN.

The shares of Bharti-Airtel — the first one to peruse the MTN deal — dropped for three straight trading sessions when the company first confirmed the talks. The share price fell from Rs 900 to close at Rs 816 on 8th May, 2008. The deal was called off on 26th May and consequently the shares rallied again to reach Rs 863. After Sunil Mittal hanged his boots, Anil Ambani of Reliance Communications (RCom) decided to throw the hat in the ring and entered into a 45-day exclusive talk agreement with MTN. The shares of RCom fell from Rs 600 to Rs 550 in three trading sessions. During that entire period of talks, discussion and negotiations, investors had a terrible experience as the stock was hammered to Rs 395, its 52-week low on July 02. And of course, Big Brother's objection to the deal also contributed to the fall to quite an extent. 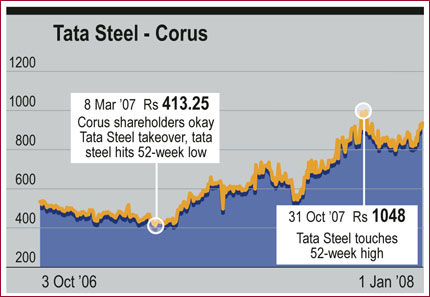 However, a classic case of shareholders' myopic vision towards a deal was seen in Tata Steel's acquisition of Corus. The stock fell from the Rs 650 plus levels to around Rs 500 on the news of the acquisition in October 2006. The acquisition, in which Tata Steel had to revise its initial offer of 455 pence to 608 pence so as to compete with Brazil's CSN, resulted in Tata Steel's shareholders, both retail and institutions, turning bearish on the stock and eventually leading the stock to its nadir. But within a period of nine months, when the company's acquisition was hailed by all, the stock price made it to 4-digits, reaching its 52-week high of Rs. 1048.

A similar scenario was witnessed in the acquisition pursed by Hindalco — a flagship company of Aditya Vikram Birla Group, of Novelis — a world leader in aluminium rolling and recycling. The stock price of Hindalco fell from Rs 180 to Rs 130 in February 2007, after the news of the acquisition. However, in Novembr 2007, the stock price went to a high of Rs. 240. And in yet another similar instance, the same was the case of Suzlon Energy, the wind power major which fought with France's Areva to acquire Germany's REpower. 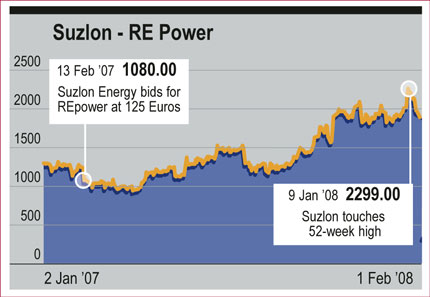 These cases make one wonder why the Indian investor loses patience when a company turns acquirer. The raison d'être is primarily the uncertainty of the deal. Furthermore, investors are also wary about the financial implications of the deal, the amount involved being highly substantial and the acquirers having to raise truck loads of debts to meet the same.

But the lesson investors need to learn from these examples is to take a long-term view and keep the golden investment rule in mind — 'buy businesses, not stocks'. If you feel that the deal makes a strategic sense with the current business model of the company and you have faith in its management, go ahead and buy the stock and if you already own the stock, don't offload it because everyone else has. Take the above discussed acquisitions, if you had held onto the stock of these acquires, you would be surely smiling all the way to the bank right now. But if you sold the stock in a state of panic, you're probably whining at the moment. Remember, panic, by definition, is something which is temporary. Patience, on the other hand, is more long-term and invariably makes you a winner. 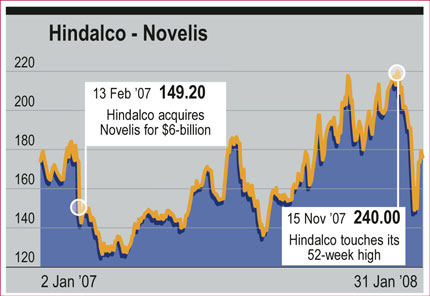