The economic cycle keeps driving governments to log high deficits, but these may well be crucial growth add-ons

Governments may come and go, leaving in their wake some economic disasters, but also creating many more assets that should, ideally, be tilted in the favour of the latter. And time, the greatest  driver and healer of progress, will keep adding on the gains.
Today, there is talk of immense government spending, which has created a record fiscal deficit. This can have a very negative impact on inflation, interest rates and even currency. Spending has increased phenomenally recently in the wake of the global financial crisis to drive the Indian economy out of the slowdown, which had caused it to log a growth of 6.7 per cent in 2008-09 from around nine per cent average logged before that. In the current fiscal, the Planning Commission estimates it will fall to 6.3 per cent.

The stimulus packages had various windfalls for a cross section of people and institutions from tax cuts to cheap funds for cash-hungry industries. The result is that the deficit climbed to 6.2 per cent and is projected to rise to 6.8 per cent as government increases its expenditure to Rs 10 lakh crore. Adding to the deficit is government’s spending on the social sector, like the farm loan waiver.

But with rising inflationary expectations and gradual withdrawal of the easy monetary policy, the likelihood is that deficit will fall to 5.6 per cent in 2010-11 and reach 3 per cent in 2013-14. The moot point is that we have been through this before. The government was in the same position way back in the early ‘80s when the overall economic situation was worse. Now, India is the second-fastest growing economy in the world. 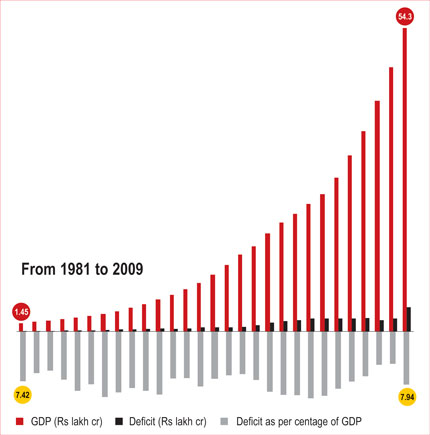