The month of September has not been an ideal one for Bharti Airtel, as it has seen its share fall in the popularity charts of the mutual fund managers as well as other investors in the wake of the collapsed merger deal with South Africa’s MTN, worth $24 billion, that would have yielded a combined base of 200 million subscribers.

It denied the Indian company its desired and declared intent to power its growth and revenue base through takeovers in emerging markets - Africa had offered the best chance of that as it is one of the largest undeveloped telecom markets in the world.

This is a marked comedown for the telecom giant, which is India's largest mobile-phone service provider by subscribers and Asia's leading integrated telecom services provider with operations in both India and Sri Lanka, as its future growth may have been compromised.

For certain investors, who had considered the deal to weigh heavy on Airtel as Bharti’s debt would have gone up and huge amounts would have to be paid in interest alone, responded by ramping-up their exposure to the stock, making it close with an over 4 per cent gain at Rs 435.35, after an intra-day rise of 11.5 per cent, the very next day of the announcement of the deal’s cancellation. The stock was underperforming the Sensex by as much as 20 per cent since the deal talk was initiated for the second time after failing initially in 2008.

But the short-term interest is not what retail investors are about. Their interest is best served through long-term investments. The deal getting junked means it is not good for the company’s future growth and that will eventually come home to roost up ahead sometime, especially as the Indian market is headed for a long period of slow growth as markets get saturated and competition forces companies to try and undercut each other with ever-lower price offers.

To the uncertainty is added the telecom regulator TRAI’s voiced intent to look at a per-second charges rather than the currently applicable per-minute charges, which will shave off large chunks of revenues for the telecom companies. That, though, has been put on the back-burner for now at least.

Realisation about the overall impact of the situation dawned soon enough, and since September 30, when the stock price was at Rs 418.55, going up to Rs 435.35 the very next day, has fallen by 20.89 per cent till October 23. 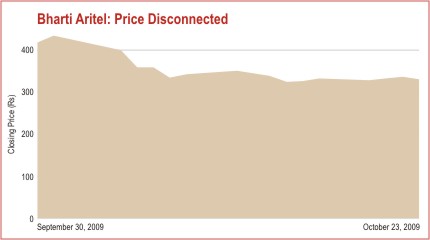 In the same vein, the mutual fund managers, who are looking to play by the book, Airtel is no longer the stock of choice. The month of September has seen fund managers effect a sell-off that reduced the number of shares held in the company from over 1,000 lakh to just above 900 lakh, while the number of funds invested in it also saw a fall - from 234 in July to 218. 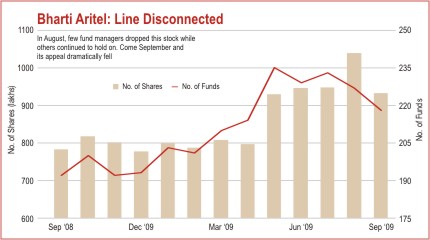 Indeed, for the telecom giant, which has grown phenomenally in a very short period, this is a time for introspection, and that is exactly what most investors too, should do.