Inflation Falls to 30-Yr Low at -1.61% | Value Research https://www.valueresearchonline.com/stories/100420/inflation-falls-to-30-yr-low-at-1-61/ After oscillating in a 0-to-1 per cent band for many weeks, inflation finally breached the zero barrier

After oscillating in a 0-to-1 per cent band for many weeks, inflation finally breached the zero barrier

Inflation in India has dropped to the sub-zero level, according to the latest statistics made available by the government.

As per the wholesale price data, inflation has fallen, not just under zero, but much more than that, it has fallen by almost 2 per cent from its previous mark to the current -1.61 per cent for the week ended June 6.

This is the first time in three decades that inflation has hit such a low and it has underlined the threat that many economists have been highlighting ever since India’s inflation figure fell under the 1 per cent mark – that the country’s economy has entered the deflationary zone.

However, while inflation has fallen into negative territory, the prices of foods and vegetables are still ruling high, such as fruits and vegetables, oils and cereals.

However, for the stock markets, at first, this become another reason to cheer. As soon as the news hit the public domain, stock markets rose on the expectation that this would certainly lead to the Reserve Bank of India cutting key rates besides adding further pressure on banks to lend more, to businesses and individuals, to spur demand and get the economy out of the recession.But they corrected fast and the Sensex headed for a closing in the red for the day.

Another reason why rates may not change will the fact that the government and the RBI have taken various stimulus measures to fight off the effects of a fall in global demand due to the financial crisis as well as to prop-up Indian demand. These include the RBI cutting its lending rate by 4.25 percentage points between October and April. The government, on its part, has contributed to the effort by axing duties and increased public spending with a view to encouraging the economy to grow faster.

According to some economists, this is not really a worrisome happening and should not be construed as falling into a nightmarish deflation scenario, that marked the Indian economy 30 years ago, when food prices dropped to extreme lows because of an excellent harvest season. But in 2009, food prices have risen and not really fallen in any category. They also argue that the sub-zero inflation figure is being driven by the high base effect, that it is only a statistical effect, and therefore it is not likely to last long, at the most a couple of months, is the prediction.

Lastly, even though Indian exports have fallen off a cliff, hitting companies in various sectors like, textiles infotech and others, yet a strong domestic demand is ensuring that goods are flying off the shelves, backed by suitable changes made by corporates on the prices they charge for their products. That also may set to rest fears of deflation too. Deflation follows in the footsteps of a sharp fall in demand.

The government, hurrying to assuage any feelings of doom that may have crept into its citizens' minds, fielded some heavyweight officials. Among them was Planning Commission Deputy Chairman Montek Singh Ahluwalia, who said that inflation in negative zone should not be a cause for worry: "It is not a cause of concern whatsoever".

Planning Commission member Saumitra Chaudhuri added, "Negative inflation is a normalisation. This is due to the base effect. Wholesale price inflation during the corresponding week a year ago was 11.66 per cent and that makes this year's number low," said. It may be remembered that last year one of the biggest drivers of high inflation were oil prices, which, at one stage were threatening to overrun the $200 per barrel mark. They have since fallen to half of that, ruling at $71 today morning.

Finance Secretary Ashok Chawla said, that these figures do not signify a contraction in demand and added, "Inflation numbers may be unusual, but they were expected." He also pointed out the government would not change it policy stance because of this unusual statistic. The RBI will be meeting in July to review its policy and expectations are of a 25 basis points cut in its lending and borrowing rates. 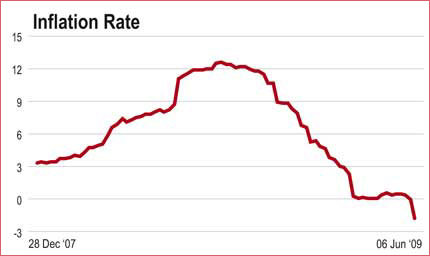