India’s foreign trade data for the month of March, financial year 2009, is out and the result is a huge negative, both on exports and imports fronts.

That there would be a damaging trend in exports was a given, considering that the global economic crisis had virtually put a lid on demand everywhere. Also, bearing in mind that Indian exports are dependent on the demand in US and West European countries, which are undergoing almost-never-seen-before growth pangs, it was a foregone conclusion that there would be red ink everywhere. But even on the import front, the falling figures indicate the slowdown that has affected India has made Indian corporate shun expenditure—in any case falling demand in India and abroad would have given them a reality check.

All this comes mainly due to weak external demand and as a result, the country’s economic growth has been decelerating. Efforts to counter these ill-effects started in October 2008 when RBI Governor Duvvuri Subbarao cut the key interest rate for the first time since 2004. Apart from this, three stimulus packages have been announced by the central bank to stimulate demand.

India has been adversely affected by the global recession. It is clearly visible that India’s foreign trade has suffered a setback. While on one hand, trade deficit has widened; on the other, exports and imports have contracted. The collapse of the nation’s exports has led to India’s current-account deficit widening. 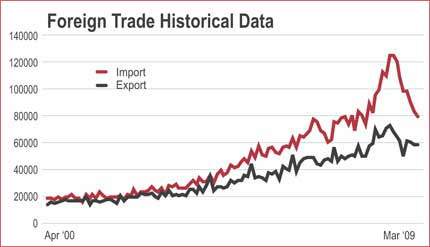