US recession, interest rate hikes, Russia-Ukraine invasion, rocketing fuel prices - none of these crises has dampened Indian markets' animal spirits. In fact, it has been scaling new highs: last month, the Sensex breached the 63,000-mark for the first time ever.

This is a heartening trend because Indian markets would usually buckle under global pressure. The 2002 dotcom bubble, 2007 financial crisis and 2013 taper tantrum are recent cases in point.

While, on the surface, it seems the Sensex has delivered a lowly 5 per cent returns so far this year, it is substantially higher when compared to UK's FTSE 100 index of 0.46 per cent and US' S&P 500's roughly 18 per cent crash.

So, what's made the Indian markets resilient this time?

Unlike in the US and UK, where high inflation has hobbled them, the Indian markets have managed to absorb the after-effects of interest rate hikes so far. 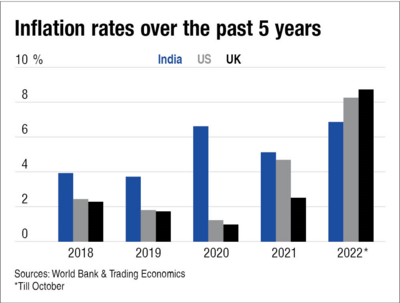 Earlier, high inflation rates would have impacted Indian markets. But ever since the Reserve Bank of India set an inflation band of 2 to 6 per cent, our markets have gotten used to the price pressures within that range.

These days, 6 per cent inflation is within our comfort zone, but for the western markets, it is a nightmare.

India's stock markets have been historically reliant on foreign money. But that's not been the case this time around.

Since the beginning of this year, foreign institutional investors (FIIs) have pulled out about Rs 2.66 lakh crore from the Indian markets. Another time, this would have broken our back. But, to our pleasant surprise, domestic investors have held the market together by pouring in about Rs 2.57 lakh crore.

SIP money has been a strong contributor, with a record Rs 1.2 lakh crore being pumped in through that route in this year alone. Just last month, Rs 13,000 crore came in via mutual fund SIPs - the highest ever amount in a single month.

Surely, the record inflows contributed to the Sensex surging nearly 6 per cent last month amid persistent weakness in global markets.

The last word
Whether Indian markets remain resilient is a question for another day.

But whatever may be the outcome, we are happy that domestic inflows, especially SIPs, have kept our markets from crumbling despite facing heat from various corners of the world.

It is a testament to Indian investors' appetite for SIPs and growing realisation that investing through this mode can benefit us in both bullish and bearish phases.

Suggested read: Party at Dalal Street, but there are some latecomers