Adani Enterprises to raise Rs 20,000 crore in the largest FPO ever | Value Research https://www.valueresearchonline.com/stories/51796/the-largest-fpo-ever-but-also-the-costliest/ The Gautam Adani-led company will use the proceeds to fund future investments and deleverage its balance sheet

The Gautam Adani-led company is set to launch the largest FPO ever. But is the exorbitant price justified?

What is an FPO?
IPOs have become akin to financial hotcakes, with over 130 IPOs just this calendar year. However, Follow on Public Offerings (FPOs) are relatively rare. FPO is a process by which an already listed company issues fresh shares to the public. And Adani Enterprise is about to come out with India's biggest FPO ever.

Adani Enterprises' FPO offer
Adani Enterprises is the flagship holding company of the Adani group and was the first company in the Adani conglomerate to get listed. It plans to raise Rs 20,000 crore in India's biggest FPO ever, beating the previous record of Rs 15,000 set by Yes Bank in July 2020. According to news reports, the Gautam Adani-led company plans to use the proceeds to fund its growth plans in the digital, healthcare, and cement segment and deleverage its balance sheet.

As of September 2022, the promoter group held a 72.6 per cent stake in Adani Enterprises. Post FPO, the chunk of actively traded shares would increase by 4-5 per cent from the current 27.4 per cent, improving the trading volumes and liquidity.

Reading between the lines
With Adani Enterprises' revenue growing at 26.4 per cent CAGR in the past three years, some might argue that the FPO was bound to be overpriced. However, an astronomical P/E of 361 times, which is 15 times more than its 10-year median P/E of 23.7, is jarring, to say the least. To justify a valuation of this proportion, the company would have to grow at a rate hitherto unseen in the Indian market. While it is true that the company is growing at a promising pace, the current valuations seem punchy for investors. 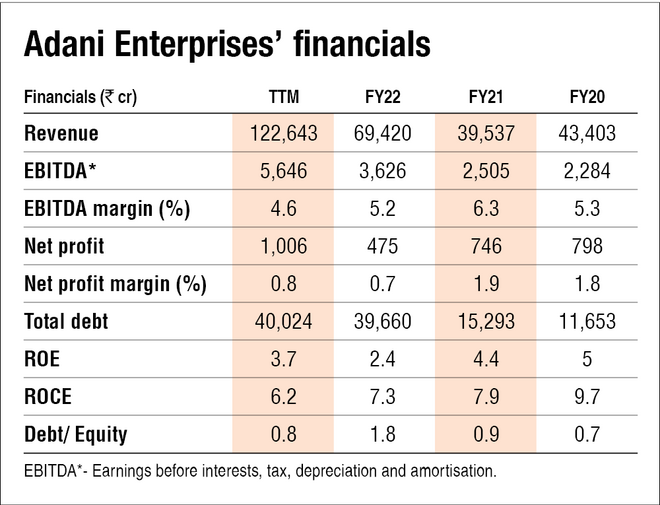 A concrete analysis of the cement industry