A convenient gateway to new companies

Over the last two years, the Indian equity markets have witnessed one of the strongest rallies following the crash in early 2020. With the sun shining, companies left no stone unturned to make hay, thereby leading to a frenzy of IPOs in 2021 - the highest in more than a decade. Investing in IPOs has its own charm for retail investor. If one gets an allotment in the right IPO, one can even double the invested corpus in a single day. However, the reality is quite different. One, getting an allotment is a function of sheer luck. Second, getting the allotment in the desired quantity is nearly impossible. Third, not all good IPOs do well on listing but gather momentum post listing over the next few months. A retail investor often has limited skills to determine how long he should hold onto it.

How about investing in a fund that in turn invests in newly listed companies? Such a fund can solve all the above problems for retail investors. Edelweiss Recently Listed IPO Fund is one such scheme. The promise
Initially named 'Edelweiss Maiden Opportunities Fund - Series 1', this fund was launched in February 2018 as a closed-end scheme with a maturity period of three years. Aimed at capturing opportunities in recently listed and upcoming IPOs, the fund was benchmarked against the Nifty 500 TRI. Probably to capitalise on the spate of IPOs, in June 2021, it was renamed, converted into an open-end fund and benchmarked against the India Recent 100 IPO TRI.

The fund invests in the best 30-40 well-researched quality businesses from the 100 recently listed and upcoming IPOs. Mutual funds make up a large chunk of the qualified institutional buyers (QIB) category, which acts as an anchor for the allotment of IPO sale of shares. Therefore, unlike retail investors, they may be allocated shares at attractive prices.

Thus, the fund acts as a convenient gateway to invest in new companies and hence profit from their potential.

The perils
A debatable benchmark: The new India Recent 100 IPO Index, against which the fund is benchmarked, comprises companies that are listed on the NSE with a free-float market capitalisation of more than Rs.100 crore during listing and that have a listing history of three business days or more. In the case of IPOs, stocks gain or lose in the initial few days of listing. But since this index includes only those stocks that have a listing history of at least three business days, the index's returns may be suppressed.

Higher exposure to mid/small caps: The fund has a higher proportion of mid/small caps, which traditionally have been more volatile than the broader markets. Also, some IPOs in these segments can face a liquidity drought, which can result in increased impact costs, thereby affecting the fund's alpha-generating ability as it continues to grow in size.

Also, companies coming up with IPOs during bull runs demand higher valuations, which may not necessarily translate into the returns that investors expect. 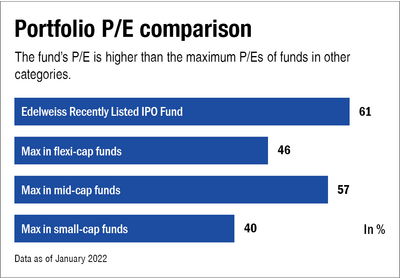 Information asymmetry: When it comes to IPOs, there's a huge information asymmetry between the seller, i.e., the promoter and the buyer, i.e., investors. Here the balance of power (in terms of information) lies with the seller who carefully builds up a positive image of the company up until the offer period, thus pricing the IPO at a steep premium.

High dependency on the IPO pipeline: As highlighted by the AMC, if the quality of new IPOs deteriorates, then the fund's investable universe may shrink. Also, the AMC had recently limited inflows in the fund as a prudent measure because the fund's assets have grown quickly and therefore, the AMC wants to review the liquidity profile of the portfolio and the IPO pipeline before accepting any further large inflows. However, as of April 1, 2022, these restrictions on inflows have been lifted by the AMC.

A historical perspective
Decades ago, amid the phases of intense IPO euphoria, some IPO-investing funds, including Taurus Newshare, UTI Primary Equity funds and Standard Chartered Enterprise Equity Fund, were launched.

In the 90s, the Taurus fund continued for two years and thereafter was converted into an open-end fund at maturity and renamed several times. Today, it is known as Taurus Discovery (Midcap) Fund. On the other hand, the UTI fund was terminated as it was merged with UTI Value Opportunities Fund in 2005 - more than 10 years after its launch.

Likewise in 2006, Standard Chartered Enterprise Equity Fund was launched amid a plethora of IPOs fuelled by a massive rally. It was made an open-end fund at its maturity in 2009. Later, it was renamed a few times, the remnants of which today exist as IDFC Large Cap Fund.

To sum up, the Edelweiss fund does provide an excellent medium for investors to quench their thirst for investing in IPOs even with modest sums of money. However, history is not on the side of such funds, especially when the number of companies lining up to get listed on the stock exchange starts to decline, thereby shrinking the fund's investable universe.