How will SEBI's new rules impact debt fund investors? | Value Research https://www.valueresearchonline.com/stories/47054/how-will-sebi-s-new-rules-impact-debt-fund-investors/ Investors may not immediately like the impacts of SEBI's new regulations but their interests will be well-served in the long run SEBI has revised several provisions related to debt funds to make them more secure. However, their immediate impacts may not be well-received by investors. Following the implementation of the new investment norms, debt funds, particularly liquid ones, will yield lesser, fluctuate more on a daily basis and charge exit loads. It may sound hardly pro-investor; however, these norms will make them healthier, safer and more liquid. That will surely favour the long-term interest of investors.

We have demystified the key announcements and their likely impacts.

Summary of changes and their impacts

All debt securities will now be marked-to-market
Impact: NAVs will reflect truer picture but it will make liquid funds more volatile

Liquid funds to invest at least 20 per cent of their money in government securities, cash and equivalents
Impact: Enhance the ability of liquid funds to handle large redemptions but dent their returns


Full mark-to-market
SEBI has mandated that the valuation of debt and money market instruments will now be completely based on mark to market. This is in line with its progressive emphasis on the market-based valuation of bonds in place of the amortisation method. In February 2010, SEBI had shrunk the applicability of amortization method to only bonds with a residual maturity of upto 91 days, which was further reduced to 60 days (in February 2012) and then to 30 days earlier this year.

The move is in line with the long-term interest of investors, as it will keep the NAVs of debt funds closer to reality.

But it will add to the volatility of liquid funds, a category where investors particularly dislike fluctuations. The progressive shift towards mark-to-market has coincided with a rising proportion of negative returns even on debt categories, which were traditionally seen to be less volatile. Data analysis by Value Research shows that investors in liquid, ultra-short, low duration and money market funds who usually check their NAVs on a daily basis would experience a negative return only 0.9 percent of time in 2009. But in 2018, negative returns popped up 4.9 per cent of time! The latest move to switch completely to mark-to-market will only add to this trend. Earlier, debt funds faced liquidity crunch on at least two occasions. First was in 2008 when the side effects of the global financial crisis impacted a handful of 'liquid plus' funds, which faced difficulty in selling their underlying instruments to honour redemptions. As a result, the RBI had to provide a temporary credit line to funds to enable them to bridge the gap between redemption requests and the sale of underlying securities.

The second instance happened in 2013 when the tightening of liquidity by the RBI caused liquid fund NAVs to drop. Fund companies found themselves in a spot of bother as investors redeemed over Rs 45,000 crore, or 28 per cent of their AUM at that time, from these funds in a single month.

The problem has only magnified since then as the assets under management of liquid funds have grown two-and-a-half-times over, while the liquidity offered by the underlying instruments hasn't kept pace. As long as the going is good, it doesn't matter. But as soon as the credit markets turn sour, as has happened in last few months, the cracks start appearing. 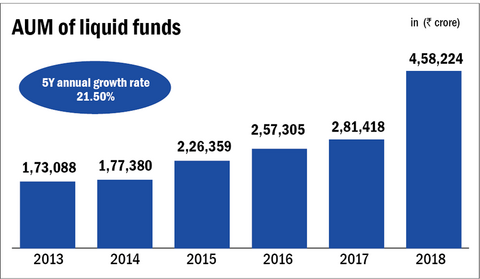 "My initial worry has not been credit. My worry has always been the AUM versus the liquidity. Funds are way too big in the context of liquidity in debt markets. If there is deterioration in confidence, this will be a big issue. This is not just in the credit space. You see it even in small cap and mid cap equity funds," says Arvind Chari, Head-Fixed Income & Alternatives at Quantum Advisors.

In a bid to somewhat bridge this liquidity mismatch, SEBI has mandated liquid funds to hold at least 20 per cent of their assets in liquid instruments.

Our analysis of current portfolios of liquid funds suggests that barring 10-12 of them (in a category of 43), most funds are well short of the 20 percent mark and therefore, will need to re-align their portfolios.

It is obviously a desirable move but it may moderate the returns offered by liquid funds, given the fact that these securities do not yield much.

Sector caps; curbs on exposure to structured instruments, credit enhancements, unlisted securities and loans against shares
SEBI has reduced the sectoral cap on debt funds from the current 25 per cent of the assets under management to 20 per cent. Further, they will not be allowed to invest more than 10 per cent of their assets in debt securities with credit enhancements, while the liquid and overnight schemes will not be allowed to invest in such securities at all. The regulator has also mandated mutual funds to have a security cover of at least 4 times of their investments in debt securities having credit enhancements backed by equities, popularly known as loan against shares (LAS).

All these measures will contribute to making debt funds more diversified and restricting their ability to invest in riskier securities in the lure of returns. Ideally, prudent investment management practices on part of fund companies should have rendered these provisions redundant but the recent episodes of over-exposure to troubled papers, particularly in case of fixed maturity plans (FMPs), found them wanting. That made it imperative for SEBI to enforce the discipline through regulation.

All in all, a wise move to make the debt funds more diversified and safe.

Exit load on liquid funds
SEBI has prescribed that liquid funds would levy a graded exit load on redemptions within a period of seven days. This is perhaps the most unanticipated measure from the regulator. Liquid funds are extensively used by corporate investors to park their surplus funds even for very short periods of a few days. The imposition of exit load is likely to dissuade them from investing in these funds and a significant portion of their investments may move to overnight funds. Whether or not that actually happens will depend on the quantum of exit load imposed and whether it exceeds the typical yield differential of liquid funds vis-a-vis overnight funds. But if it does, it can have implications for the markets for commercial papers and T-bills with a maturity of up to three months, as liquid funds are prominent investors in these papers.

Conclusion
The new regulations will ensure that investors' hard-earned money is managed more securely by fund companies. But they need to re-align their expectations from debt funds and be prepared for more ups and downs in their day-to-day values.