LIC Housing Finance
Promoted by Life Insurance Corporation, LIC Housing Finance was incorporated in 1989. It has 194 domestic and international offices. Its profit per employee stands at Rs 10.5 crore in FY17. Out of its total loans, 96 per cent are individual housing loans, while 4 per cent are developer loans. The company is also engaged in wealth management and asset management through its subsidiaries.

PNB Housing Finance
Promoted by Punjab National Bank, PNB Housing Finance was incorporated in 1988. It has 63 branches in 39 cities. Its profit per employee stands at Rs 62 lakh in FY17. The company's loan portfolio comprises of 71 per cent housing loans and 29 per cent non-housing loans in FY17. In 2009, US based alternative investment player Carlyle Group acquired 49 per cent stake in the company. 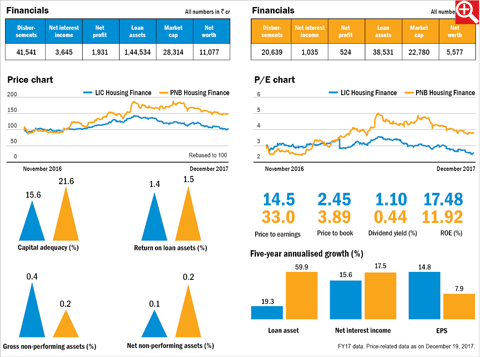