Two general insurers got listed during 2017. While ICICI Lombard is a private sector company, New India Assurance is a PSU unit.

General insurance includes health, vehicle, travel, fire and other types of non-life insurance. Since there were no general insurers listed directly on the Indian Exchanges before these two companies, many investors have little idea about how to analyse general insurers.

Here are the key metrics on which general insurers are evaluated:

Total premium: The total amount received as the premium for the insurance policies issued. The higher the total premium, the better. Total premium is also called gross direct premium.

Net premium: Total premium less the premium 'ceded' to a reinsurer or another insurer plus the premium accepted from another insurer. A general insurer has to buy reinsurance from companies like GIC Re for at least 5 per cent of its policies, as mandated by the insurance regulator, IRDA. This helps in lowering the general insurer's risk. The premium paid for this has to be deducted from the total premium. Also, insurers transfer some of their risk to other insurers and pay premium for it or they can take on some risks from other insurers and get paid for it. The premiums for these are added or deducted from the total premium to arrive at net premium.

Net premium should be carefully analysed as it tells a lot about the kinds of policies an insurer is issuing and the risk it is taking for them.

Net incurred claims: Claims incurred in a specific period after adjusting for those paid by the reinsurer. High incurred claims could lead to underwriting losses.

Solvency ratio: A measure used to test the solvency of the insurer in the worst-case scenario: all the insurance claims materialise at once. The insurance regulator has mandated it to be at least 150 per cent.

Net-expenses ratio: The ratio of operating expenses, including the cost of acquiring new customers, to the net premium earned. A low net-expenses ratio suggests efficient operations and is desirable. 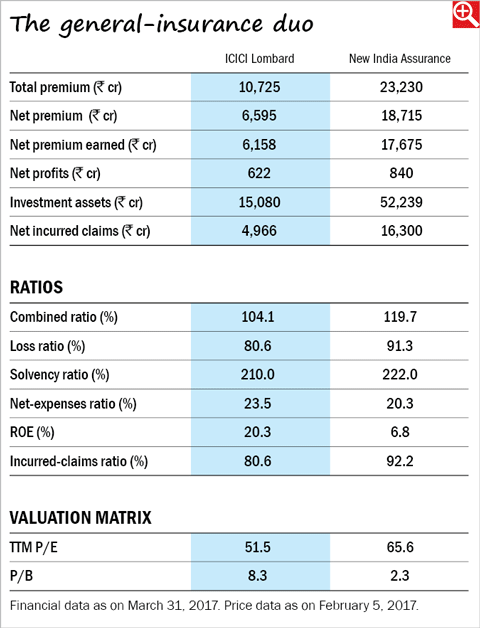