Lessons from the most expensive IPOs of 2007 and 2010 | Value Research https://www.valueresearchonline.com/stories/34934/lessons-from-the-most-expensive-ipos-of-2007-and-2010/ Is it a good idea to invest in IPOs? What should you keep in mind while investing in them? Should you hold or sell when you see the prices falling? Read on to find out the right course of action Is it a good idea to invest in IPOs? What should you keep in mind while investing in them? Should you hold or sell when you see the prices falling? Read on to find out the right course of action History is a great teacher, only to those who want to learn from it. When we look back to see the fate of some of the most expensive IPOs of the bull run that ended in January 2008, we find a common motif. Lofty valuations do not hold up for very long. Take a look at the four graphics below. These are some of the most expensive IPOs of recent times. These consist of diverse companies in unrelated industries. None of them were able to hold onto their high valuations for long. Keep in mind that these are not IPOs that have lost the most investor wealth. These are just the most expensively valued ones at the time of their listing.

The IPO of Religare Enterprises, a financial-services firm, in 2007 was subscribed 160 times. The retail portion was subscribed 90 times. The stock listed at a 75 per cent premium and traded at 155 times earnings. So far, the company has not made any profit in four of the last five years. Investors in this issue have lost 90 per cent of their investments.

Firstsource Solutions, sold as the country's first pure-play BPO listing and backed by none other than ICICI Bank, was subscribed 50 times and listed at a PE of 137 times. Today, it has lost half of its investors' money.

Suryachakra Power Corporation saw listing gains of 50 per cent and traded at a PE of 136 times. The company has not made any money in the last five years, has lost 98 per cent of investor wealth and today trades at a princely price of 50 paise a share. 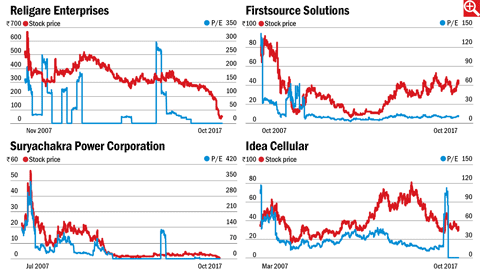 The Idea Cellular IPO sought to raise Rs 2,125 crore from the primary market. It got bids worth Rs 1,21,557 crore - 57 times. Listing at over 100 times earnings, Idea gained 14 per cent on listing but added around 40 per cent to Aditya Birla Group's market value. If you would have held on to your Idea shares today, you would have made a whopping 3 per cent - cumulative, not annual, gain on your investment!

All in all, all these IPOs proved to be a massive disappointment for their investors.

Most expensive IPOs of the 2010 bull run
Similar to the IPO mania of 2007, there was a spate of new issues in 2010 and a similar rush ensued. Like the expensive IPOs earlier, the outcomes of these new issues were brutal for investors who held onto them. Again, keep in mind the companies discussed below are among the most expensive IPOs of this period - not the most shareholder-wealth eroding ones though."This shipyard and this IPO is going to be the game-changer in the industry. We can just assure our investors that whatever faith they have reposed on us will not go waste," said Pipavav Shipyard chairman Nikhil Gandhi, in a media interview after the IPO was oversubscribed by more than eight times. The IPO sold as the country's largest private dockyard, listed with a PE of only 768 times, which went up close to 1,000 times earnings. In five of the last ten years, the company has not made any money for its shareholders, and last made profits three years ago. The company has been bought out by the Anil Ambani group in 2015 and is now known as Reliance Naval and Engineering.

Sold as a pure-play renewable-energy enterprise with the promise of unlimited potential from wind energy and biomass, Orient Green Power listed at a valuation of over 150 times earnings. The company that last made profits for its investors in the year of its listing has since lost 80 per cent of its value.

A star IPO of its time, Indiabulls Power (later renamed RattanIndia Power), a power-generating subsidiary of Indiabulls Real Estate, turned heads after being subscribed four times within an hour of the issue going live. The issue closed with an oversubscription of 21.8 times. The shares listed at below the issue price, at a valuation close to 100 times earnings, before tanking sharply. The company raised eyebrows from the start with issues pertaining to sourcing of all equipment from China, to the prospect of further capital infusion and no operational capacity at the time of listing. The company did not make any money for its shareholders after FY12 and after losing over 85 per cent of its stock price since its listing, now trades at Rs 5.50 a piece. 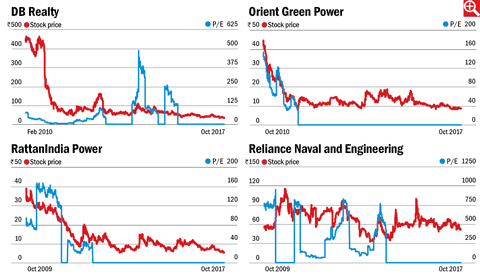 Real estate player, DB Realty's IPO in early 2010 was subscribed 2.9 times despite poor reception from retail investors. The stock listed at a valuation of 78 times earnings and vaulted Shahid Balwa and Vinod Goenka, managing directors of DB Realty, into India's top 100 richest with each over $1 billion in net worth. Today, Shahid Balwa stands accused in the ongoing 2G scam, facing the prospect of being convicted in the case. The company has also been embroiled in loan defaults and other cases and has lost over 90 per cent of its value since its listing.