The next 15 years..... | Value Research https://www.valueresearchonline.com/stories/34692/the-next-15-years/ By the time MFI's 30th anniversary issue comes out, I expect that 74 per cent of the Indian mutual fund industry will be equity By the time MFI's 30th anniversary issue comes out, I expect that 74 per cent of the Indian mutual fund industry will be equity 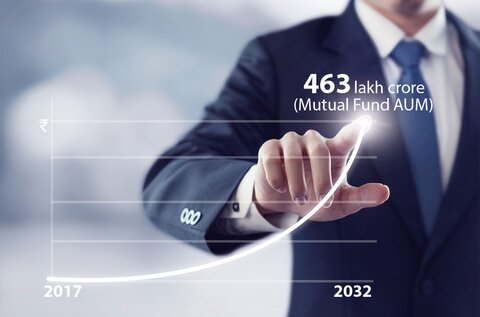 'A journey of a thousand miles must begin with a single step', goes the old Chinese saying. It's a bit of a cliche now and found mostly on motivational posters, but like most cliches, it still holds true. As the fifteenth year of Mutual Fund Insight draws to a close, it's tempting to look back at our journey and feel complacent. However, investment is a forward-looking activity and few investors bother to know about the past.

Of course, this is not a very interesting projection, nor will it be very remarkable if it comes true. If I apply a similar calculation to the total amount of money being managed by mutual funds, then over the last 15 years, the amount has grown from Rs 98,378 crore to Rs 19 lakh crore. If it again grows by the same 22 times, then by 2032, it will be 463 lakh crore. This is not surprising. So let's try something that'll really have us shaking our heads in amazement. In October 2002, about 11 per cent of that total (Rs 10,684 crore) was equity. Now, 28 per cent (Rs 6 lakh crore) of the investment is equity. That's a growth of 56 times. If this relative growth is maintained, then by the time of this magazine's 30th anniversary, some 74 per cent of the Indian mutual fund industry will be equity.

Is this possible? Definitely. In fact, I think it's quite likely. How about comparing mutual funds to the equity market as a whole? In 2002, mutual funds held equity amounting to 2 per cent of the total market cap of Indian stocks. Now, this is up to 4.5 per cent. Small numbers are hard to judge, but this 2.3x increase, rather than the earlier numbers, is something truly impressive. It shows the mainstreaming of Indian mutual funds as an investment option.
What used to be a fringe activity, limited to a handful of people, has transformed into a mode of wealth creation that is easy to access, convenient to invest in, safe, liquid and above all, easy to learn about and understand. This last bit, about being easy to understand, is where we come in.

Value Research has been in existence since the early 90s, longer than most of the mutual fund companies in India. When I started this activity (it was hardly a business then), it's scale was ridiculously low compared to today. And yet, it was clear to me even then that if ordinary Indians were to have a chance of creating genuine wealth from their savings, then this fixed-income country will have to start moving towards equity.

We still have a long way to go. The good thing is that a lot of pieces are falling in place now. There are push factors that make mutual funds clearly the better choice (sahi hai!) than other investment alternatives. Interest rates have fallen drastically thereby lowering returns from traditional deposits. The real estate industry has been unmasked for the fraud it is. Even gold's huge run has ended in stagnation. On top of these is the gradual removal of blockades in the actual act of investment. Digital banking, Aadhaar, inexpensive and ubiquitous internet access - it's all ready and functioning finally.

Who knows, the next 15 years may be even more exciting than the first!