Lethargic large caps | Value Research https://www.valueresearchonline.com/stories/34653/lethargic-large-caps/ Since a fast-changing India will see many of its established businesses disrupted by smaller companies, returns from large caps are likely to be low

Since a fast-changing India will see many of its established businesses disrupted by smaller companies, returns from large caps are likely to be low 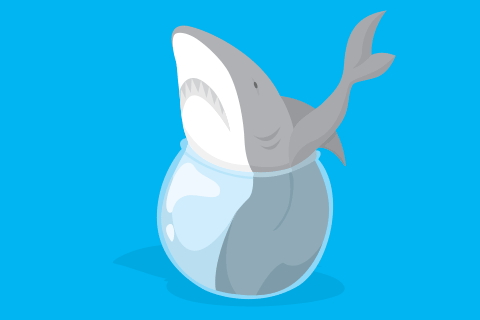 Momentum investing, i.e., buying stocks which are going up is generally recognised as one of the six investing 'styles' that work. A logical implication of momentum investing is that the larger stocks in a market-cap weighted index, such as the BSE 100, should do better than smaller stocks. In fact for most of the 1990s, this adage worked nicely. See Figure 1.

It shows returns of the bottom decile of the top 100 stocks in India minus the top decile.

So, why, a generation after the 1991 reforms, have the smallest stocks in the top 100 started outperforming the largest stocks? More specifically, why has the trailing P/E multiple for the bottom decile re-rated at 3 per cent per annum between 1991 to 2017, whereas the trailing P/E for the top decile has de-rated at 0.5 per cent over the same period? (See Table 1.)

The answer I think lies in the increasing inability of the top 10 stocks in Indian companies to lock into India's overall economic growth. As Table 2 shows, in the early 1990s, the top decile of the top 100 stocks was clearly participating in India's overall GDP growth revival (just as the bottom decile was). However, in the FY12-17 period, the picture has changed considerably - the top decile's earnings growth is nowhere close to even nominal GDP (which was 10 per cent over FY12-17). In contrast, the bottom decile of the BSE 100 is comfortably keeping pace with the broader economy.

Investment implications
Changes in India's society, politics and its economy are going to lead to rapid churn in the Sensex and the Nifty. To quote from Ambit's September 2016 thematic, "Powerful transformations underway in the Indian economy are likely to manifest in the form of a high churn ratio in the Sensex. By calendar year 2025, we expect the Sensex to retain only 15 of the companies that currently comprise the 30-stock index."

To be specific, in a changing India, large conglomerates with crony capitalist antecedents and/or poorly incented management teams are sitting ducks for smaller, hungrier companies, which now have abundant access to cheap capital (public and private equity and debt).

From an investment standpoint, the logical market-neutral strategy against such a backdrop would be to go long the bottom decile of the top 100 stocks and short the top decile. In the seven years since FY11, this strategy has given positive returns in five years and a CAGR return of 8.1 per cent versus the BSE 100's CAGR of 7.1 per cent (an equally weighted bottom decile portfolio purchased on April 1, 2010, and annually rebalanced would give a compounded return over FY11-17 of 13.7 per cent)