Keeping fingers crossed | Value Research https://www.valueresearchonline.com/stories/34204/keeping-fingers-crossed/ A combination of global and domestic factors will keep the Indian economy and markets on tenterhooks The stock market bottomed out on the budget day of 2016, when the Nifty 50 hit 6,800. In the next 15 months, equity has soared. The Nifty has returned 21 per cent since February 2016 and mid caps have returned even more.

Can we expect this rally to continue? The first and the most essential element for the bull run has been liquidity. Foreign portfolio investors have bought equity worth over Rs 70,000 crore since January 2016, while domestic institutions have bought close to Rs 50,000 crore. Retail participation has also been very positive. That works out to about Rs 7,000 crore/month of net institutional buying on average or a little over $1 billion/month.

Second, institutions will pay attention to profit growth. Institutions expect earnings growth to accelerate to around the mid-teens for the major indices, seeing growth at somewhere between 14-18 per cent for the next year or two. If we look at the forward P/E estimates, the implied growth rates are similar or higher. If growth disappoints, there could be an institutional pull-back.

Valuations are high but not quite in the red zone according to most institutions. But if EPS growth does not meet projections, valuations could climb to dangerous levels.
Apart from fundamental equations of valuations and earnings, there could be pull-backs across India, along with other global equity markets. This may happen for multiple reasons which might not have much to do with India.

One danger is geopolitics. Tensions between Qatar and other Arab nations could lead to a spike in oil prices, for example. Then there's Brexit, which will impact economic growth. There are increased tensions between the US administration and the European Union, which could have negative consequences. US protectionism could also lead to a knock-down on growth, hitting Indian IT and pharma sectors in particular. And, of course, there could be an escalation of tensions, already serious, between India and Pakistan or North Korea-South Korea, China-Japan, Iran-US, Russia-Ukraine, Israel- Syria, etc.

Apart from geopolitics, 'geo-economics' could be a negative factor. The US Federal Reserve could continue to hike US dollar policy rates. The European Central bank also looks set to tighten its monetary policy. Both situations could have adverse impacts on FPI liquidity.

On the home front, there are several worries. As of now, Indian banks have stressed loans outstanding to the equivalent of 9.5 per cent to 10 per cent of GDP. That may affect credit growth badly in future. Everybody will be watching how the Indian system deals with that problem. Nothing has worked so far.

The second bother is that the adverse effects of demonetisation are still showing up. Farmers couldn't get reasonable prices for their produce and massive farm-loan waivers have now become politically necessary. More such loan waivers could follow. That will hit bank balance sheets; it will increase fiscal deficit; it may also affect rural household consumption patterns.

GST is another big question mark in the short run. It's complicated; it's disruptive; it offers ample scope for low-level corruption. Once it does settle down, it should be an improvement on the current system. But GST took quite a while - two fiscals or so - to settle down across the European Union. Most European countries have between two and four GST rates and no absurd 'anti-profiteering' clauses. India has around 11 rates if you take the cesses into account. GST might cause lots of confusion in the short run. Quite apart from what it could do to corporate results and consumption patterns, it will lead to massive changes in revenue collections and fiscal deficit.
Let's take a look at historic valuations and EPS growth rates. The historic record suggests that growth at 14-18 per cent EPS may be possible, though it does not happen too often. The Sensex has sustained EPS growth rates of 25 per cent at least four times in the last 16 years. However, the overall EPS CAGR is only about 10 per cent since 2000. So it's not a common occurrence (see Figure 1). 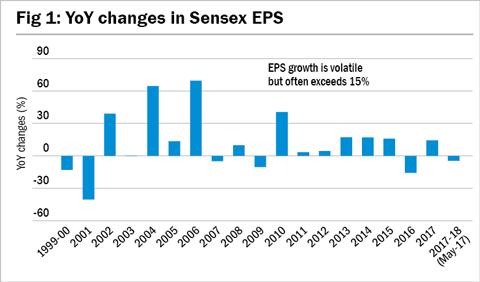 The last time very high growth happened was 2009-10, when the index EPS jumped 40 per cent as there was a global rebound from the subprime financial crisis. There is a global economic revival at the moment since the US, EU, and China are all registering good numbers.

Q4 results do show that the return on equity is rising for Indian corporates, and the Nifty's Q4 results indicate that the aggregated EPS rose by 11 per cent for the top 50 companies. (The weighted EPS will be different.) This may reinforce the general air of optimism.

The Nifty 50 is currently trading at a P/E over 24. There are multiple statistical studies that show that the one-year return tends to be negative for investments made at a P/E of 22 or above (see Figure 2). This gives us some sort of roadmap for the coming year. 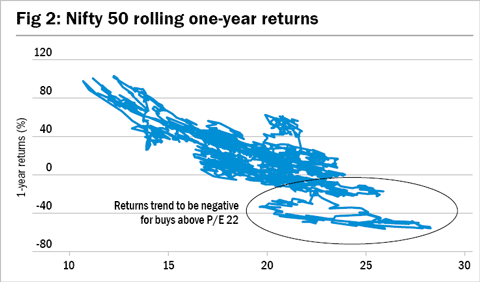 There are multiple disruptive possibilities ranging from domestic (bank crisis, GST, assembly elections) to international (Brexit, international tensions) which could affect the market. Some of these (GST, solutions to bank crisis) may be positive.

Keep watching for changes in these variables. Be prepared to wait out a long period unless there is an extraordinary jump in the EPS.