What to do now? | Value Research https://www.valueresearchonline.com/stories/34163/what-to-do-now/ What are the different stages of a market cycle and where do we stand now? Here's a look

What to do now? What are the different stages of a market cycle and where do we stand now? Here's a look As the Sensex scales new lifetime highs, this is a good time to refresh our minds about market cycles. Markets always move in cycles, from pessimism to euphoria and between scepticism and optimism. In this feature, we look at the market cycles that India has witnessed over the past two decades and where we stand now. We also look at what options you, as an investor, have when markets become overheated.

Pessimism
The stage of pessimism usually comes into play after a great bull run has ended and stock prices are in shambles. Headlines blare out stock-market losses and many stocks which were once market favourites now trade 80-90 per cent below their peak levels. This is a period when nobody wants to invest in the stock market. Everyone wants to sell and cut their losses. Short-term sure bets rather grudgingly become long-term investments.

A rather interesting thing happens to market valuations, too. As the market falls, valuations become attractive. The same market that was once trading at lofty valuations and appeared attractive now trades at even half those valuations and is still shunned.

Take a look at the two major market crashes in the last two decades. The first was brought upon by the end of the technology and communication boom that peaked in February 2000 and then went downhill from there. The second was the infrastructure and realty bull run that ended in January 2008. 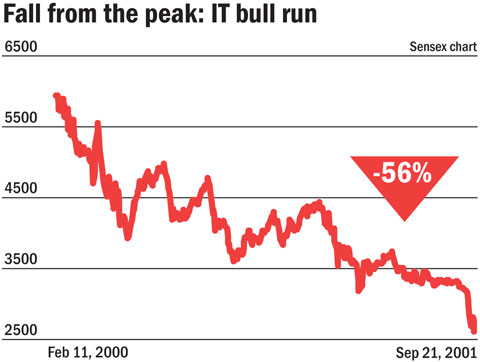 The fall that followed the crash of tech stocks saw the Sensex losing 56 per cent of its value. Valuations fell from a peak of 25.5 times trailing-12-month earnings to 13.5 times. 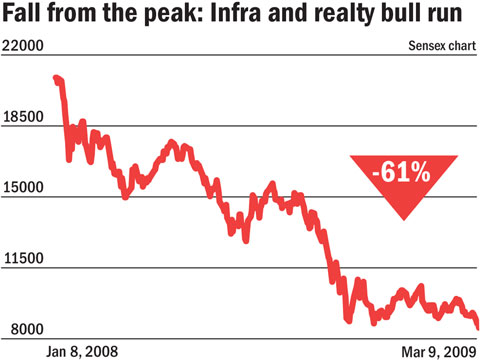 The infrastructure and realty bull run that ended with the global financial meltdown of 2008 saw a loss of 61 per cent in the Sensex's value. Valuations fell from a peak of 28.5x to 11.62x.

Scepticism
The period following a major market crash is then followed by scepticism. The market is not convinced that the the bottom has been reached. Investors are still away and the market stagnates. There is nothing that excites investors, not even low valuations.

Even after the market crash of the IT bull run, the markets remained range-bound for most of 2001-2003, gaining 12 per cent by the end of this period. Sensex valuations oscillated between 12-18 times in this period, averaging at 14 times. 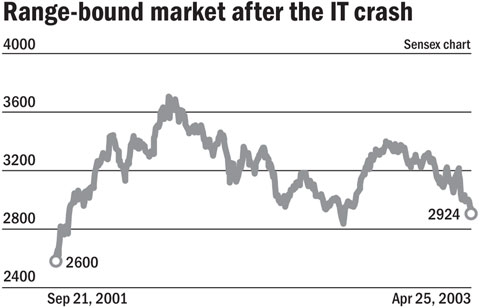 Similarly, after recovering from the shock of the financial meltdown, the markets again remained range bound for a period of a little over three years. This included the period of the 'policy paralysis' of the previous government. Sensex valuations moved between 16x and 24x. 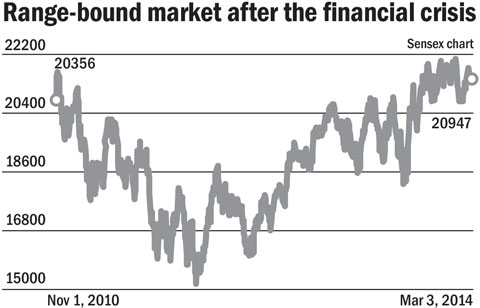 Optimism
This stage is marked by hope that things will change for the better. The most recent example is the hope that the markets have placed on the change that PM Narendra Modi will bring to the country's fortunes. Let's look at how the market behaved from the time Modi was nominated as the next PM candidate to one year after election results. During this period of a little less than two years, the Sensex gained 38 per cent. Market valuations moved from 17x to 20x. 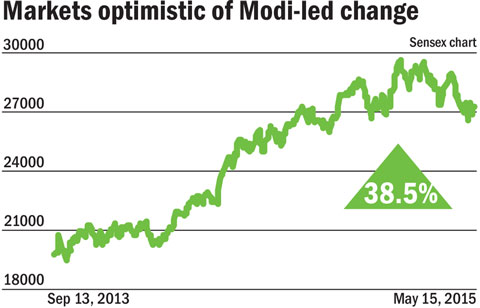 Euphoria
Let's tread into the euphoria territory. The markets by now have thrown all caution to the wind. The party, it appears, will go on forever and there will be a fundamental change in the world. This is the final stage of a bull run that has run its course.

In the last three months of the IT bull run, the markets gained close to 40 per cent. The Sensex P/E ratio expanded from 18.5 to 25.5 in this short time. 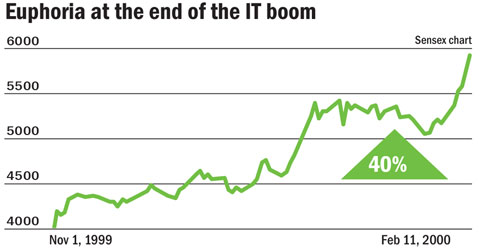 Let's take a look at how the infrastructure and realty bull run ended. In the last one year of that rally, the Sensex gained close to 70 per cent. Valuations expanded from 19x to 28.5x. 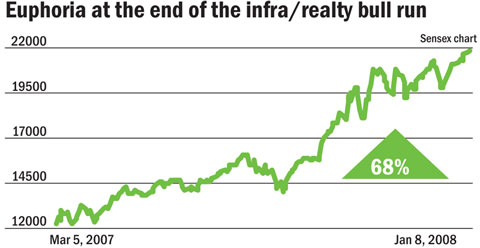 It's easy to look back and see market peaks and bottoms. To understand where we currently stand is a rather different thing. This year, the Sensex is up 15 per cent. Valuations have moved up from 21x to 23x.

If history can teach us anything, it is this: markets can remain expensive for a long time before going down and the fall, whenever it comes, takes everyone by surprise. For the prudent investor though, alarm bells should start ringing when continuous market peaks are not backed by fundamentals. 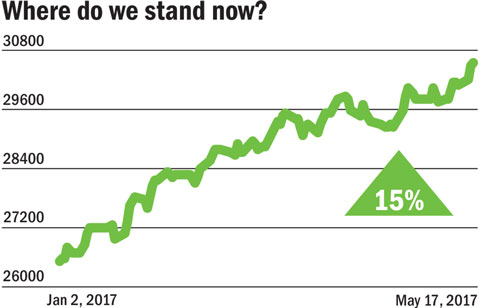 In an overheated market, there are two strategies available for the prudent investor.

Sell or reduce your portfolio: For the more conservative investors, this strategy involves selling or reducing their portfolios and sitting out of the market for some time. The markets will rise even after you sell or reduce your position and the wait for markets to fall could be a long one. Once the markets correct, you can start buying stocks again at lower valuations.

Sell the most expensive stocks: The first strategy involves things like discipline, detachment, prudence and patience - qualities not all investors possess, not even the more experienced ones. For such people, the second strategy involves selling the most expensive stocks in their portfolios, stocks that now trade at valuations never seen before in the sector or the security. At the same time, you can keep on holding onto companies that will continue to make money for you even if the markets closed down.