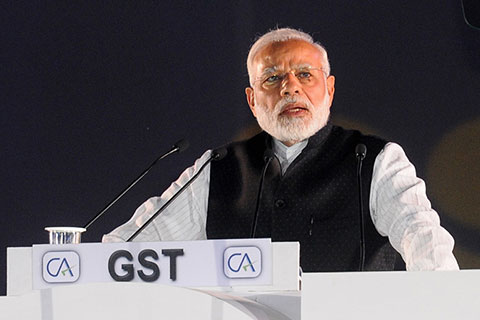 He did so in an hour-long speech that he delivered at a ceremony marking the celebration of 'CA Day', which is July 1, the anniversary of the establishment of The Institute of Chartered Accountants of India (ICAI). Although the PM said some nice pro-forma things about CAs and their profession, I do not recall any non-election speech of his that had so much bluntness and such thinly-veiled criticism of anyone. The only exception would probably be his TV address announcing demonetisation, which makes sense because the underlying driver was the same on that occasion too. This speech received only cursory mention in the mass media, but has excited a lot of comment as well as consternation among CAs.

During his address, the PM unambiguously laid his finger on the nation's CAs as the prime facilitators of black money generation. He made sharply mocking comments about how busy CAs were during the demonetisation period and how CAs cancelled expensive foreign holidays to work around the clock at that time, wondering what was it exactly that they were busy with. He then said, in a most threatening tone, that evidence against three lakh firms had been unearthed through data mining and that one lakh companies had been struck off the register of companies He wondered--in a tone of exaggerated puzzlement--that who could it be who had facilitated such activities and certified such companies' accounts?

Twice during his speech he spoke about the inherent conflicts of interest in the ICAI's extensive powers. He pointed out that the ICAI--which is made up and elected by CAs themselves--has the power to set the CA curriculum, to conduct the CA exams, to certify CA's fitness to practice their profession, to judge whether they had committed any violations and then to punish the guilty. And yet, Modi pointed out, only 25 CAs and been found guilty of malpractice in the last 11 years while 1400 cases were pending.

The most significant aspect of the speech was that both times he mentioned the ICAI's absurdly broad powers, he referred to them rather pointedly as granted by parliament. I'm sure the ICAI's bigwigs present at the venue are wise enough to understand what Modi was reminding them of--if parliament can grant these powers, then it can take them away too. In times past, the ICAI brass would have been right in ignoring such a speech from anyone else. However, after demo and GST, I think the man has demonstrated that in the battle to make rich Indian tax-thieves pay their share, he's not going to stop at any half-measures. India's chartered accountants should ignore what Modi has said at their own peril.

As an investment analyst, I have always despaired at the fact that in India, corporate balance sheets cannot be trusted because for a price, CAs will put their signature on any fiction. In fact, they help create the fiction. Not just that, helping businesses cheat on taxes is the main service many (most?) of them offer, something that the PM referred to this in his speech. The impact that crooked accounts have on investors found special mention by him. He spoke of how senior citizens who may invest their money in mutual funds or stocks could face losses because CAs do not use the power of their signature properly.

The important question is that now that the PM has fired the opening salvo personally, how does the government intend to carry on this war? No one, least of all Narendra Modi, is naive enough to believe that an inspirational speech is all that will take for CAs to return to the straight and narrow.

The first change needed--as the PM all but said--is that CAs must be liable for what they do under real laws and the real legal process and not the mockery that the ICAI runs. However, a deep change is needed not just in the disincentives but also the incentives. The beneficiaries from truthful accounting are investors, banks, lenders and through taxation, the entire country. The beneficiary from dishonest accounting are the businesses themselves. But the CA is chosen by, and paid by, the business that is getting audited and will thus always do what the business wants it to do. You cannot fight this. I think the right solution would be that CAs are randomly assigned to businesses every year by a transparent process.

Anyhow, the struggle to fix the way India's accounting is done will be a long one. Whenever you have an hour to spare, do go to this link and listen to this most interesting speech. If you are a CA, then don't wait for that spare time, listen to the speech right now, even though you won't enjoy it much.