Strengthening foothold | Value Research https://www.valueresearchonline.com/stories/33978/strengthening-foothold/ Here is how Bata and Relaxo Footwears, two leading companies in India's organised footwear sector, stand in comparison to each other

Here is how Bata and Relaxo Footwears, two leading companies in India's organised footwear sector, stand in comparison to each other Bata India
Bata is India's largest footwear retailer, with more than 30 per cent market share in rupee terms. Not many people know that Bata isn't an Indian company. It is a subsidiary of Switzerland-based and family-owned Bata Shoe Organization. India's Bata Shoe Company was incorporated in 1931 in Calcutta. In FY17, the company sold around 50 million pairs of footwear.

Relaxo Footwears
Known for its classic white-blue hawai chappals, the idea of expanding Delhi-based family-run footwear business Relaxo was first conceived in 1976 by two brothers, Ramesh Kumar and Mukund Lal Dua. Eventually, it was incorporated in September 1984. Since then Relaxo has come a long way. In FY17, the company sold about 135 million pairs of footwear and hawai chappals. 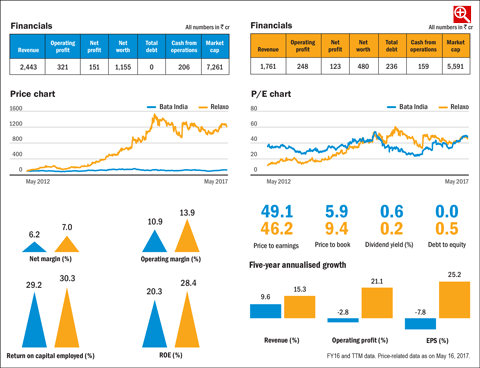 India is behind only China in terms of footwear production. It currently produces 200 crore pairs of footwear yearly. This number is expected to double by 2020 as India's per-capita consumption will move close to the global average of three pairs. While unorganised players still control 65 per cent of India's footwear market, they are losing ground to organised players like Bata and Relaxo.