You could laugh, or you could weep | Value Research https://www.valueresearchonline.com/stories/33892/you-could-laugh-or-you-could-weep/ The investment advice given by bank salespersons is now the subject of standup comedy, mostly because it deserves to be

You could laugh, or you could weep

The investment advice given by bank salespersons is now the subject of standup comedy, mostly because it deserves to be 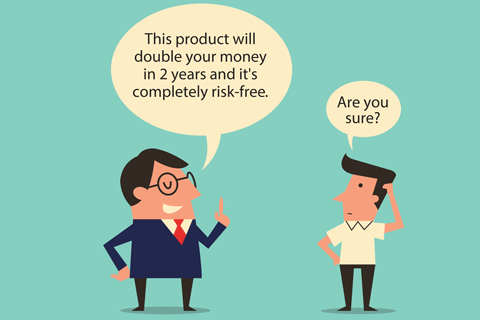 To begin with, please watch this YouTube video of a standup comedy performance. Listen closely to the part where the comic narrates how, in his pre-comic life, he was working with a bank. "I used to work in bank as an investment consultant. I used to tell jokes only, but nobody knew. Even I didn't know that these were jokes. My bank told me, you go to really rich people... and tell them, sir, you earned all this money. Well done. But you don't know how to manage it. I, on the other hand..." But let me not spoil it for you. Find the video at the end of this article.

It's funny, as good standup comedy should be. Except that if you happen to have had an experience similar to Mr Anand's ex-clients, then it's really not funny at all. One of the reasons is that in the comedy routine, the client is framed as a very rich man and the investment advisor as a bumbling idiot. That's good for some laughs, but obviously very far from reality. From what I've observed, banks' investment consultants tend to target those who are least likely to summon up the knowledge and the resources to figure out what's being done to them and then complain about it.

Coincidentally, just the day someone sent me this video, I also came across a long article in the US edition of Bloomberg.com on the widespread damage done to the finances of those who used the service of professional financial advisors. Unlike India, there has been at least some detailed research in the US on financial advisors and the quantitative impact of financial advisors on investors' risk and return levels.

In one study, research workers pretending to be potential customers went to a large sample of financial advisors asking for advice on the investments they were already holding. These existing portfolios were perfect examples of low-cost, diversified portfolios that such investors should be holding. However, a shocking 85 per cent of the financial advisors recommended changes to the portfolio that would amount to chasing returns and generate higher commissions. Another study found that on an average, investors advised by brokers had returns that were lower by three per cent a year. In the US, the current argument is about the so-called 'fiduciary rule', a law that says that advisors are legally obliged to put clients' interests ahead of their own.

In India, that sounds like an esoteric argument. We have all kinds of rules for financial intermediaries and yet financial advisors always act in their own interest. Whether it is insurance or mutual funds or stocks, behaviour is always guided by the incentives that exist for the salesperson. There's a huge pile of regulations in every area, and yet, none of it is effective in preventing bad advice.

The reason is simple--there is not a single financial product where the interest of the salesperson is aligned to that of the saver/investor. Take any example. The seller (organisation and person) benefits from the sale itself, while the saver-investor benefits if the choice of financial product turns out to be correct, which happens over years. As the comic in the video above confesses, by the time the customer figures out what happened to the money, the salesperson is with some other bank. As long as we have a system where the seller can make the sale and take the commission, nothing is going to change.

Sadly, judging from the direction that rules and laws in India have taken, financial regulators do not believe this. They seem to believe that to prevent intermediaries from following their own self-interest, all you need to do is make rules that ask them not to do so. If we had an effective system of catching the perpetrators and giving them exemplary punishment, then this might actually work because the punishment itself would shift the balance between incentives and disincentives. However, I have zero hope of this actually happening. For one, bad, self-serving advice is not a provable crime. Moreover, regulators have shown only marginal willingness and ability to discipline the big private banks, who are the main perpetrators of organised financial mis-selling at scale.

I guess one can hope that one day, regulators will wake up and take some effective steps against what's happening. For now, it's up to investors themselves to use their own common sense and knowledge and save themselves.