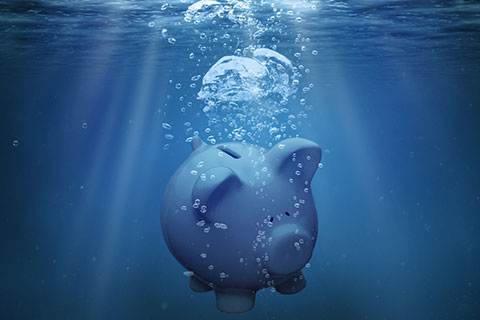 'Mutual funds are subject to market risks' - this is the standard warning flashed by both equity and debt mutual funds. But, over the years, while equity-fund investors have learnt to take market risks in their stride even when stock markets tank by 10 or 20 per cent, the manifestation of market risks in a debt fund still leads to considerable unease and even panic among investors.

One cannot entirely blame the investors for this. In recent times, debt mutual funds have been increasingly (and wrongly) positioned as a tax-efficient alternative to bank fixed deposits. Many first-time retail investors have thus been switching their 'safe' money into debt mutual funds. Fund houses, on their part, continue to run the category on a caveat-emptor (buyer-beware) basis, assuming that the generic warning about 'market risks' will suffice to warn investors about all that can go wrong with their returns in a debt fund. But the last three months have starkly brought home the kind of 'market risks' that even force losses on debt-fund investors.

Unpredictable rates
On the one hand, medium- to long-term gilt funds, loading their portfolios with very long-maturity government bonds during the (bond) bull market of the last three years, have received a nasty jolt from the RBI's latest policy review. In February, the central bank cited rising inflation to signal a permanent pause to its rate-cutting cycle. This saw market yields on the ten-year government security spike up from 6.4 per cent in the first week of February to nearly 6.9 per cent by the end of the month.

This performance from duration funds raises the question: If equity-fund managers are so wary of predicting market reversals and timing their calls, why are debt-fund managers who manage long-term funds and income funds so confident about making the right timing calls?

Time and again, market behaviour has shown us that interest rates can behave just as unpredictably as the Sensex.

Not safe
Things haven't been any smoother for other risky category of debt funds - those which take on lower-rated corporate bonds. On February 22, four debt schemes from Taurus Mutual Fund delivered an unpleasant surprise to their investors with a sudden mark-down in their NAVs.

A downgrade in Ballarpur Industries bonds saw four Taurus debt funds tumble. Taurus Short Term Income Fund's NAV dropped by 11.13 per cent. Taurus Ultra Short Term Bond Fund's NAV lost 11.79 per cent. Taurus Dynamic Income Fund's NAV dropped 11.82 per cent. And even Taurus Liquid Fund suffered a 7.22 per cent loss in a single day. Unless the fund house moves to take these securities off the books, more than an entire year's returns have been wiped out by this single episode.

The Taurus-Ballarpur episode, which is almost a scene-by-scene repeat of the JP Morgan-Amtek Auto event last year, leaves many questions unanswered. One, owning risky securities in a 'credit-opportunities' fund may be acceptable, but why did Taurus Mutual Fund hold low-rated paper in its Short Term Income, Ultra Short Term Bond and Liquid Funds? These are after all considered the least-risky categories of debt funds where investors park emergency money!

Two, while Ballarpur enjoyed decent investment-grade ratings of A+ for term loans and A1+ on commercial paper until November 2016, India Ratings sharply and suddenly downgraded these to BBB- and A3, respectively, in December 2016. These are pretty close to the default grade.

So what made the rating agency suddenly revise its opinion? And why did Taurus Mutual Fund rely wholly on the rating agency's decisions and not take its own view on the debt it owned. Here it is notable that no other debt mutual fund held Ballarpur Industries in its portfolio as of January. Three other funds which held the paper had exited by November 2016, just before the downgrade.

Three, there's also the question of why Taurus, despite the JP Morgan episode, allowed the Ballarpur paper to take up such high weights in its scheme portfolios. The funds which took a beating had weights of anywhere between 4.3 per cent and 11.96 per cent to this paper. Now SEBI rules require fund houses to cap their bond exposure to single issuers to 10 per cent, with the trustees required to give special approval to take this up to 12 per cent. Taurus trustees are likely to have given this approval. In fact, the entire saga suggests that Taurus Mutual Fund must have tried to get rid of this paper in December, but couldn't find counter-parties, given the illiquid nature of the corporate bond market. Meanwhile, smart institutional investors who got wind of the downgrade may have pulled out of the fund, forcing it to sell its more liquid holdings.

Safeguards?
In fact, after this episode, many suggestions have come pouring in from experts on what retail investors can do to guard against such episodes. Many have pointed fingers at rating agencies for their rating systems that go entirely by a scheme's past data and fail to highlight the imminent risk of default.

Others suggest that investors should stay away from too-small debt schemes, as they can carry higher concentration risks. Yet others point to the high proportion of 'direct' investors in the affected Taurus funds and state that a good advisor would have warned investors about the schemes.

But it is doubtful if even all the above safeguards can really protect retail investors from the sudden shocks in debt funds. The risks that have cropped up in the JP Morgan and Taurus funds are as much a reflection of the flawed structure of the Indian debt market as of poor investment decisions by the fund house.

The lack of disclosures from companies to rating agencies and the tendency of some Indian businesses to go from the pink of health to insolvency in a matter of weeks are the reasons for the nasty shocks in debt schemes.

The long time taken by rating agencies to recognise debt-servicing problems and their tendency to effect sudden and sharp downgrades, leaving the scheme holding the baby, is another. Given that debt-recovery processes in India work at a snail's pace, there are no vulture investors or 'distressed debt' funds to swoop in and buy the bonds either.

The lack of depth and liquidity in the corporate bond market, which prevents a fund house or investor from selling or liquidating a bond (even at distress valuations) as soon as it turns suspect, is the biggest constraint of all.

Together, these risks are quite hard to foresee and therefore it is unlikely that investors can avoid them entirely by doing their own homework, taking expert advice or even sticking to large funds.

Way ahead
So what can be done? For one, 'credit' calls must be restricted to debt schemes that are specifically named as credit funds, with the risks clearly highlighted. Camouflaging such products as 'accrual' funds or 'income' funds or quietly parking lower-rated corporate paper in liquid funds in order to showcase a better yield are quite unfair to investors who seek a safe parking ground for their money. If necessary, liquid funds, ultra-short-term funds and other classes of schemes positioned as 'safe' must not own any corporate paper unless these are structured obligations.

Two, having charged hefty fund-management fees to investors, fund houses cannot claim that they rely on rating agencies to warn them of impending default. Fund houses that run credit funds need to have independent research capabilities to assess credit so that they can exit doubtful investments ahead of warning bells in the market.

Three, given the underdeveloped nature of the Indian debt market, it is quite clear that running funds which take on credit risk in an open-end structure gives smart investors, who can pull out first an undue and unfair edge over those who stay. Thus, mixing assets from super-savvy institutional investors and retail savers into the same scheme can be quite injurious to the latter.
In short, the fund industry needs to realise that if it wants to woo bank-deposit investors into debt mutual funds, it needs to go back to the drawing board and design an entirely new product class for this risk-averse group. The current practice of inviting retail investors into debt funds once meant for smart corporate treasuries must stop. Recent experiences with both duration and credit calls in debt schemes offer room for introspection for fund raters, too. Maybe their rating systems can give greater weightage to risks (volatility in returns, duration risks and credit profiles of the portfolio) than returns when it comes to evaluating debt schemes.