'Next-quarter earnings to be key' 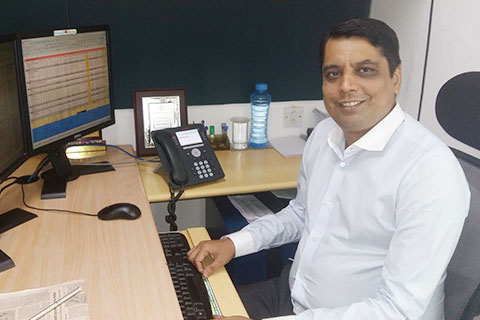 After beginning his investment career with SBI Mutual Fund in mid-90s, Ajay Bodke worked with Standard Chartered Mutual Fund (acquired by IDFC AMC) before briefly venturing out as an independent investment professional. He joined Prabhudas Lilladher in September 2011 and has spearheaded the investment-management division since August 2013 as CEO and chief portfolio manager, PMS (portfolio-management service). Credited with delivering more than two-fold returns during this period via the MultiStrategy and EquiGrow schemes, Bodke in a tell-all interview with Kumar Shankar Roy describes his stock-selection process, why he avoids complex conglomerates and why the impact of demonetisation could be seen in the next quarter.

How would you explain your investment style: growth or value? Why do you make that choice?
I employ a combination of growth and value philosophies in an attempt to achieve an optimal balance in the portfolio construct, though the emphasis on each style varies depending on where the market conditions and valuations are broadly perched. In an environment of ample liquidity, benign interest-rate outlook and robust demand, the accent is more on growth style to leverage a fast-paced earnings trajectory in a market with higher valuation multiples. Conversely, a tighter liquidity and interest-rate scenario, anaemic growth trends and heightened risk outlook on the economic or geopolitical front would warrant a broader shift to the value style.

However, each market scenario mentioned above presents opportunities for some investments employing the contrarian style. The market's wild oscillations in terms of thematic and sectoral preferences present opportunities to buy out-of-favour, contrarian ideas at low valuations, with ample margin of safety on the downside and large medium-term upside potential. As the negativity surrounding that theme/sector ebbs, the market eventually realises undervaluation and re-rating follows.

Indian IT sector is currently in the midst of a painful-yet-inevitable tectonic shift underpinned by the adoption of digital technologies, automation, robotics, cloud computing, internet-of-things, etc. The rise of protectionist rhetoric and barriers to free movement of people are only compounding the headwinds. Only those businesses that eventually transform their architecture and make it future-ready will be able to survive and thrive. These tough times have led to a sharp erosion in valuations and under-ownership of IT stocks in portfolios, presenting an opportunity for contrarian investors.

Tell us about how you go about with your stock-selection process.
At PL-PMS, we follow a rigorous and disciplined approach. This approach is embedded in a constant evaluation of topical macro themes for the generation of ideas. These ideas are then subjected to a three-layered evaluation matrix of assessment of business fundamentals, comparative valuations and market-interest factors.

Once an appropriate macro theme has been chosen, beneficiary sectors are identified and ideas within those sectors are filtered first through a business-fundamental bucket, where qualitative and quantitative aspects are analysed. Corporate governance practices of the promoters/management and their long-term track record in stakeholder value creation are the foremost qualitative aspects considered. Addressable market opportunity, sustainable competitive advantages of the franchise in terms of either its product or service offerings, distribution outreach, cost efficiencies, nimble-footedness in competitive response, etc., are studied. Various financial ratios are analysed to focus on the margin profile, capital efficiency and risk to arrive at the estimates of medium-term growth in revenues, earnings and, most importantly, free cash flows.

If a company successfully clears this hurdle, it is put through the second bucket of appropriate-valuation comparison. Valuation tools employed differ with the characteristics of each sector and comprise P/E, P/B, EV/EBITDA, discounted cash flow vs. enterprise value, etc.

If the business is found to be valued lower than its fair value, then various market-interest factors like free float, institutional holdings, research coverage, etc., are looked into to assess potential price performance.

What sort of stocks do you avoid? Are there sectors or companies you always steer clear of?
Although an investment professional must ideally evaluate opportunities in all sectors to find the undervalued franchises, the decision-making process gets influenced over time by many experiences that shape his investment perspective.

I have come to believe that long-term shareholder value creation is only possible if there is a total congruence and alignment of interests of shareholders and promoters/managers. Such a symbiotic relationship is almost always absent when the ownership rests with the government. Sector after sector - be it telecom, aviation, power utilities, financial services, etc. - the commanding heights and market dominance once enjoyed by public-sector entities have frittered away due to slow and ponderous decision making, lack of competitive impulses, slothful product-and-service offerings, slow embracing of technology and, most importantly, lack of customer-centricity in operations.

This has resulted in nimble, cost-efficient, tech-savvy, customer-focused private-sector entities stealing a march over government-owned companies. Hence, as a fiduciary entrusted with the responsibility of optimising portfolio returns, I tend to be very cautious before allocating capital to government-owned firms.

As far as possible, I try to avoid investing in complex conglomerate companies comprising multiple unrelated businesses. The opaqueness in inter-business capital allocation, convoluted holding structures and inability of promoters/managers to master strategies to manage disparate businesses are some of the reasons for my wariness.

Is Donald Trump a major risk for Indian companies?
I strongly think that global markets are underestimating the risks that the Trump administration's policies could pose. Some of the unnerving pronouncements pertain to not only immigration and trade front but also the security front, where provocative statements have been made against China.

The Indian IT sector would be warily watching the new American government's move on the H-1B visa front as well as the progress of some of the restrictive bills introduced in the US Congress, which if passed would constrain people's movement, increase costs and depress margins. Trump's threat to impose border tax and compel companies to shift manufacturing to the US can disrupt the business dynamics of exporters in many sectors like pharma, engineering, forgings, chemicals, etc. We feel the impact on pharma will be limited as a prime motive of the governments in advanced economies is to reduce high and rising healthcare costs and it is a win-win for them to encourage imports of high-quality drugs from Indian generics players.

The earnings season has not reflected the doomsday scenario in the wake of demonetisation. When do you think the recovery in earnings will be broad-based?
The ongoing earnings season reflects a story of contrasting halves. Although it is not reflecting the doomsday scenario feared by many investors in the wake of demonetisation, the recovery in earnings is still fragile and not broad-based. Negative volume-growth trends in FMCG, anaemic credit growth in the banking system, aggressive stuffing of channel inventory by many companies to buoy primary sales, and talk of some amount of pre-buying by channel partners using old currency notes are all reminders to exercise abundant caution before rejoicing that the damage to aggregate demand was not substantial. We would prefer to closely watch the earnings trajectory in Q4FY17 to assess the residual impact on demand.

Some of the drivers for a broad-based recovery would include a bumper rabi harvest, fast pace of remonetisation, alleviation of cash crunch to help cash-dependent sectors as well as a robust 25 per cent increase in capital expenditure by the central government to help revive the investment cycle. The government's pump priming is especially important as private capex cycle remains comatose. With its emphasis on large spends in sectors like roads, railways and power transmission, these spends are expected to have a large multiplier impact on aggregate demand over the medium term.

Given the run-up in so-called beneficiaries of GST, are there any sectors and stocks that are yet to play catch-up and could be lucrative opportunities?
The impact of GST roll-out will be felt over the medium term. Although it is a seminal reform that would alter the fundamental architecture of how business is conducted in the country, it is expected to tilt the scales in favour of organised-sector players by plugging tax evasion enjoyed by many players in the unorganised sector, rearranging supply-chain logistics and prompting companies to rework their manufacturing and distribution networks.

The government needs to proactively iron out any short-term impediments likely to be faced by industry that may dampen aggregate demand, which would be just about recovering from the impact of demonetisation. We expect organised-sector players in FMCG, logistics and home-improvement sectors, like sanitary wares and paints to benefit over the medium term. Although an immediate impact on earnings growth in the wake of implementation of GST is ruled out, investors would hail the roll-out as the government's victory in implementing one of the key structural reforms and re-rate the market, thus benefiting most sectoral valuations.

Is it possible to form a correct opinion on corporate governance for an Indian firm today, given the recent Tata and Infosys cases?
Traditionally in India, it is the promoters (be they private or government) that have wielded untrammelled influence in deciding strategic direction as well as day-to-day operations of companies. As both domestic and foreign-institutional shareholding has increased substantially over the last two decades, there are signs of rise in shareholder activism in questioning the rationale of some of the practices and the decisions of promoters. Even independent directors in some instances have started playing a more proactive role. Creditors and lenders need to shed their passivity and join activist shareholders in opposing questionable decisions.

As institutional shareholders act as trustees of public wealth with a mandate to exercise proper due diligence and optimise investor returns, this activist streak is only going to increase over time. Many strategic decisions related to diversifications, hive-offs, capital allocation, transfer pricing, etc., will be closely scrutinised and get publicly debated.

Institutional investors have lately questioned certain decisions in venerable companies like Maruti Suzuki, the Tata Group, Infosys, etc. This whiff of transparency needs to be applauded by all stakeholders.