Amidst the Rupee rumble | Value Research https://www.valueresearchonline.com/stories/33186/amidst-the-rupee-rumble/ IT and pharma, which are deemed to benefit from a fall in the rupee, may not benefit this time due to their own problems

Amidst the Rupee rumble

IT and pharma, which are deemed to benefit from a fall in the rupee, may not benefit this time due to their own problems 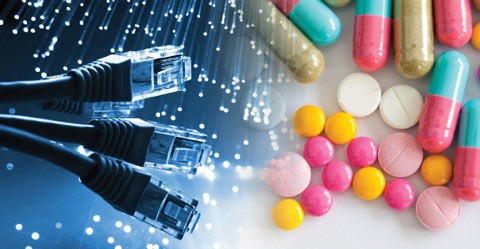 In the past three months, the rupee has fallen by about 2 per cent versus the US dollar and has trended towards historic lows. There are several reasons for this. There is also reason to believe that the rupee is likely to continue weakening over the next few months or even longer.

The rupee hit a record low of Rs 68.73 in late November and it has since traded below Rs 68 multiple times (see Figure 1). The pressure has been due to several reasons. First, the RBI had to complete a reverse swap of about $26 billion equivalent. This was a legacy from the Q3 2013-14, when Indian banks were encouraged to raise FCNR (foreign currency non-residential account) dollar-denominated deposits and swap them for rupees. The spike in the demand for the USD would have pushed up the INR-USD rate. That's done and dusted. 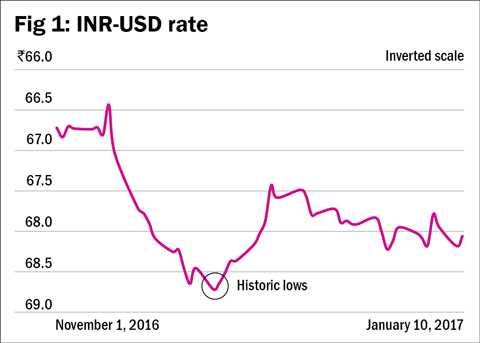 Foreign portfolio investors (FPIs) have sold both rupee debt and rupee equity in large quantities in Q3 after being positive on rupee assets through the first half of 2016-17 (see Table 1). 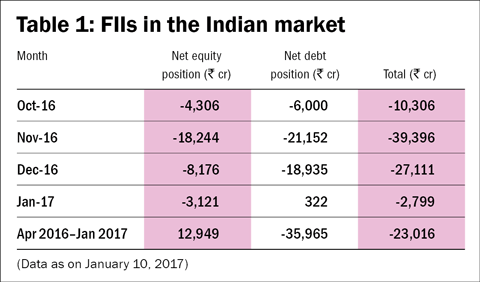 Again, FII selling increased the demand for the USD (and increased the supply of the INR). FPIs could continue selling rupee assets since they have gone negative on all emerging markets.

Rising crude prices are a third reason for the rupee to have lost ground (see Figure 2). Higher crude prices always affect India's trade balance. This trend could well continue or maybe not. 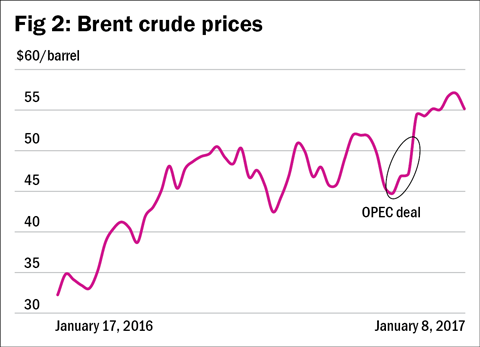 The geopolitics of oil are very complicated. OPEC has put together an agreement (which includes commitments from Russia, which is a large exporter but not an OPEC member) to restrict supply. But the US shale industry will start pumping from shutdown wells if prices move over, say, $65/barrel. However, shale takes about three-four months to get going. There are also conflicts in Nigeria, the Middle East, Crimea and internal turmoil in Venezuela, which could all lead to supply cut-offs. There is also the possibility of Iran being sanctioned again, given a hard-line US administration.

A fourth reason for a weak rupee trend is that the difference in yields is narrowing between the INR (bonds yields are falling) and the USD (yields are rising from near-zero). See Figure 3. This reduces the attractiveness of INR assets. The Federal Reserve has raised US policy rates and says it may hike them several times in 2017 because US inflation is rising. Rupee yields have fallen considerably during the same period. This makes rupee debt less attractive. It is one reason why FPIs have sold and they might continue selling. 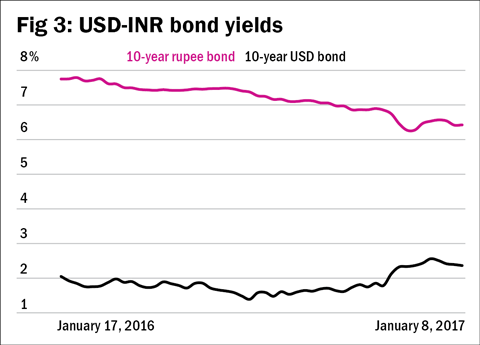 The chances of the rupee trending lower over 2017 seem good. In normal circumstances, we could expect this to boost exports. The traditional hedge for a weaker rupee has been higher exposure to the IT industry and the pharma industry, which is also a major exporter.

But both the industries are somewhat nervous at the moment. Pharma has had to cope with a series of tough inspections by the US Food and Drugs Administration, which certifies production facilities as up to the required standard for exports to the US. In addition, pharma companies fear that the new administration may reformat the US healthcare industry in ways that may hurt Indian pharma players.

The IT services industry is at a more complex inflection point. The Indian IT industry gets about 60 percent of its revenues from the US. In policy terms, and due to geopolitics, it has been hit by two events.

Trump has made many noises, threatening to impose taxes on companies that offshore. There is also a new bill in the US Congress which proposes to raise the bar considerably for H1B visas (they will only be handed out for highly-paid jobs and the quota will be reduced, etc.). If that goes through, it will add to the costs for Indian IT service firms.

The other negative strike for IT firms has been Brexit. This hurts Indian IT companies headquartered in UK, which used the UK as a platform to enter the EU. Brexit means that those companies may have to relocate and absorb consequent costs.

Azim Premji has recently said, "These (geopolitical) developments can pose a risk to the IT industry. Questions have arisen from developments in the political arena, from the fast-unfolding environmental crisis and from the forces that want to shape the world into a place of exclusion, conflict and suspicion."

But Vishal Sikka feels that may be even bigger long-term challenges. "(The) biggest disruption, the one that has been proceeding irreversibly and unstoppably in our times, is the accelerating force of technology and digitisation," he wrote in a new-year message to his company. "We will not survive if we remain in the constricted space of doing as we are told, depending solely on cost arbitrage and working as reactive problem solvers."

In fact, the entire services model may need to be reworked. The India IT services model works on labour arbitrage: put a lot of competent, relatively low-paid coders into jobs and take over routine systems/maintenance tasks. Increasing automation, helped along by artificial intelligence, reduces the need for high manpower counts. The cloud has also eliminated, or vastly reduced, the need for companies to have large systems departments in-house. The IT service model is moving towards leaner, smarter firms with less labour arbitrage. Can India adapt to this?

So the $150-billion Indian IT industry is now struggling and despite a stronger USD, forecasts don't seem great. Nasscom has lowered the IT export growth target to 8-10 per cent for 2016-17, from the earlier projections of 10-12 per cent growth. Nasscom expects revenue addition to be between $8-10 billion in 2016-17, lower than the $10 billion growth recorded in 2015-16. Experts see a 3 per cent contraction in revenue in 2017-18 on account of clients choosing new technology over outsourcing. (This has been written before the first results and guidance for Q3 started coming in.)

"So as I think about all this... we need to harness the dual forces of automation and innovation," Sikka also wrote. Can the Indian industry (not just Infosys but the IT industry as a whole) make that shift?

Well, the industry is run by very smart people who have enabled it to survive previous threats. It may be able to adapt to technological changes quickly. Many of the policy uncertainties could also reduce over the next three to six months as Brexit happens and the new US administration takes charge.

The valuation situation is interesting. The Nifty is up 5 per cent since January 2016. The NSE IT Index is down 8.5 per cent in the same period (see Figure 4). 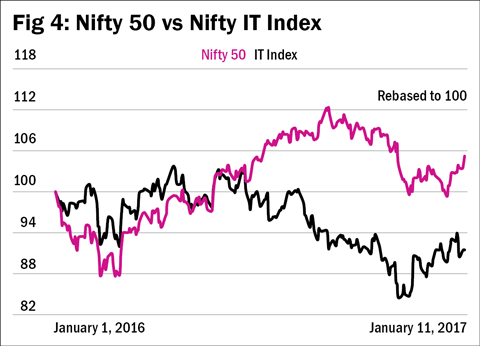 This is extraordinary since TCS, Infy, Wipro, HCL Tech and Tech Mahindra are all constituents of the Nifty 50 as well as being five heavyweight members of the ten-stock NSE IT Index. Of these, HCL Tech is the only one not to have lost ground since January 2016.

In terms of averaged valuations, the IT index is now considerably cheaper than the Nifty. The Nifty trades at a P/E of 22-plus, while the IT Index is trading at a P/E of 16-17. Even this is still rather high, given the low-growth guidance.

It's very likely that things will get worse because the industry is a long way from adapting to new technology drivers. We could see it beaten down to new cyclical lows.
I see that as an opportunity. IT is an extremely cyclical industry and it's hard to imagine a global economic revival where IT spends will not go up. There are also too many high IQ people in that sector for it to get completely washed away. But it's also quite likely that pole positions will change and smaller firms will do better. So there are risks but the sector might also throw up many bargains over the next year or two.

This column appeared in the February 2017 Issue of Wealth Insight.