Jockeying ahead | Value Research https://www.valueresearchonline.com/stories/33035/jockeying-ahead/ Page Industries' Jockey brand has become a marquee name in the innerware segment, enabling the company to register revenue growth thrice that of its closest competitor

Page Industries' Jockey brand has become a marquee name in the innerware segment, enabling the company to register revenue growth thrice that of its closest competitor

Page Industries, manufacturer of innerwear, has achieved what thousands of high-tech businesses have not. It has compounded its revenue by an average of 33 per cent in last ten years, while its return on capital employed was even higher, at an average of 53 per cent. How did it manage this feat? By hitching on the 'Jockey' brand, which has made a name for itself in the Indian innerwear market for affordable and quality products.

Why Page can continue to be an Unusual Winner
Still a long way to go Page has captured a market share of 38 per cent in the mid-to-premium innerwear market. Yet, it still has a long way to go. With expected market penetration of only around 50 per cent in its segment by 2020, Page has a market opportunity that is still far from being saturated.

Benefits of Jockey to continue Page, through the use of smart advertising, has turned Jockey into a premium aspirational brand in the minds of Indians. That means the brand will likely score over regional names, like Crystal or Gopal. This advantage is likely to continue to accrue to Page over a long period of time.
Expanding product portfolio In a bid to stay ahead of competition, Page has adopted a twin strategy. First, it introduces a new product every year. Second, it has over the years expanded its product portfolio by adding such categories as kids' innerwear, thermals, T-shirts, loungewear and shapewear. The advantage of such a strategy is that competitors will have to race against Page just to keep up. 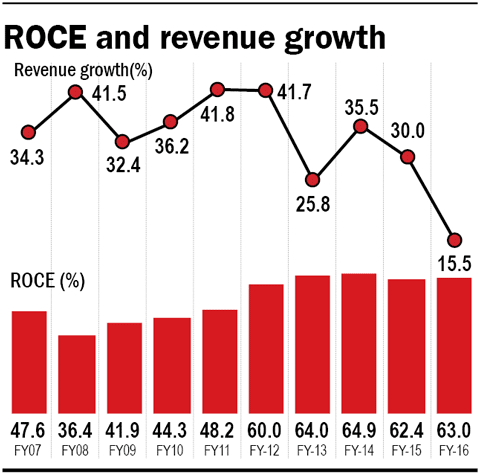 Outlook and valuations
Page is way ahead of competition in most key metrics. Its three-year revenue growth of 27 per cent is three times that of the closest competitor Rupa. Its three-year average EBITDA margin of 21 per cent is way higher than Rupa's 15 per cent. And an average ROCE of 43 per cent knocks Rupa's 26 per cent out of the park.

Page is expected to report earnings growth of 33 per cent between FY16 and FY21 (Ambit estimates) as it maintains its lead over traditional competitors, who are not moving fast enough to counter Page's move deep into the Indian market. A rising disposable income lends itself well to Jockey's aspirational appeal.

The stock trades at an expensive looking 66 times earnings - far ahead of its five-year average trading multiple of 51 times. Wait for valuations to cool down before owning Page. You can try its innerwear in the meantime though. (Disclaimer: The analyst does not own any Page stock, but has found its products comfortable and of high quality).