Here are a bunch of interesting facts about HDFC Bank that I learnt from Tamal Bandyopadhyay's book, 'A Bank for the Buck' 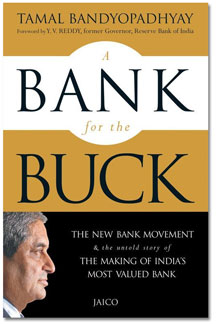 If you don't own it directly, one of your equity mutual funds almost certainly does. It is the third largest company in India by market capitalisation and has given investors a jaw dropping 19% annual return over the past 10 years (26% since listing day). But was it always so? Where did this bank come from? Tamal Bandyopadhyay's book, A Bank for the Buck tells you the story of HDFC Bank. Here's a collection of little-known facts about the bank and its journey.

Birth
The banking licenses issued in 1994-1995 saw the birth of many of today's stars such as HDFC Bank, ICICI Bank, UTI Bank (now Axis Bank) and Indusind Bank. This group also included 'Times Bank' set up by the Bennett Coleman Group (owner of The Times of India) and Centurion Bank which didn't do quite as well. HDFC Bank acquired Times Bank in 1999 and Centurion Bank in 2008.

What's in a name?
Deepak Parekh, who headed parent HDFC Ltd. wanted to call the new bank 'Bank of Bombay' because it was the only one of the 10 new banks set up after the 1991 reforms to have its headquarters in Mumbai. However, the argument that its peers ICICI Bank, IDBI Bank and UTI Bank had taken their names from their parent institutions, prevailed. Both ICICI and IDBI were later merged into their respective banks while Axis Bank separated itself from parent UTI.

IPO
HDFC Bank went public in 1995. The issue was oversubscribed 55 times and listed at about 40 rupees, 3 times its issue price. Its current price is 1246. After adjusting for bonuses, stock splits etc, its return since listing comes to a whopping 26% per annum. Its shares were also listed on the New York Stock Exchange (NYSE) in 2001.

Parent and Child
HDFC Ltd does not charge HDFC Bank a royalty for the use of its name, however it can ask HDFC bank to change its name if its shareholding in the bank drops below a threshold level. Deepak Parekh, Chairman of HDFC Ltd., is not on the board of HDFC Bank but attends most of its board meetings as a 'special invitee.' HDFC Bank does not sell its own home loans but acts as a distributor of HDFC Ltd. in return for a commission and the right to buy back 70% of such loans.

Turning down Infosys
Nandan Nilekani, then head of market and sales at Infosys, approached HDFC Bank in order to sell it Infosys's software (Bancs 2000). He was turned down in favour of CITIL's Microbanker software. CITIL was part of the Citibank group and HDFC had to lobby Citibank hard to overcome objections that software was being sold to a competitor. CITIL is now Oracle Financial Services Software Ltd.

First Customer
HDFC Bank's first corporate borrower was Siemens. It had acquired a number of borrowers even before getting a banking license - so it lent them money as 'inter-corporate deposits.' Its first individual borrower was D.B. Remedios of Thane who borrowed 35,000 to build a house.

Tax Collector
HDFC Bank persuaded the CBDT to allow it to collect taxes by offering to deposit them with the tax authority in as little as 4 days (earlier PSU banks would take 2 weeks). Today it is the second largest collector of direct tax after SBI.