Spinning profits | Value Research https://www.valueresearchonline.com/stories/32610/spinning-profits/ A portfolio comprising companies undergoing demergers and those that have been spun off can decisively beat the market 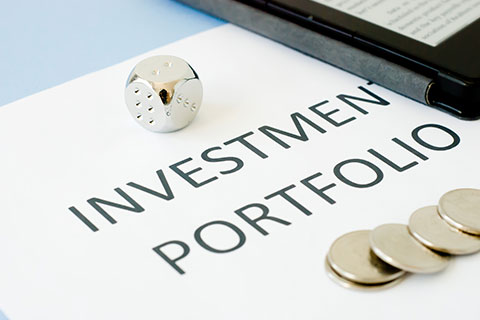 Joel Greenblatt is not as well known to the general investing public as perhaps he deserves to be. A hedge-fund manager with an outstanding track record, he shut his fund when hugely successful and turned to teaching at an Ivy League school. Before returning to investing as a business, Greenblatt wrote a couple of books that were highly influential. One under the rather cheesy title of You Can Be a Stock Market Genius is targeted at the individual investor but would be a worthwhile read for any professional.

The key thesis of the book is that individuals need not be driven by the need to match stock-index performance quarter on quarter and can therefore seek investment opportunities in more arcane areas, which the professional cannot do. Consequently, it is feasible to beat professional managers consistently without taking higher risk. Greenblatt mentions several areas such as merger arbitrage and long-dated options. However, the one area that is most easy to follow for an Indian investor would be spin-offs (or what we like to call demergers).

What is a spin-off?
A spin-off occurs when a corporation takes a subsidiary, division or part of its business and separates it from the parent company by creating a new, independent, free-standing company. In most cases, shares of the new spun-off company are distributed or sold to the parent company's existing shareholders. Spin-offs don't always result in a new share getting listed - companies may spin-off divisions which are then sold off to other companies. This could be motivated by the need to raise cash or simplify business structures. JP Associates' sale of its various divisions to raise capital to repay debt can be an example of a spin-off. However, the best value for shareholders is often created when the spin-off results in a newly listed share that is given free to existing shareholders.

A study by JP Morgan on the value unlocking from spin-offs is summarised in Figure 1. The study notes that after the news of the spin-off is publicly available, excess returns (stock return less beta-adjusted market return) continue right through till well after the completion of the transaction. The transaction itself takes almost a year to complete. Over a two-year time frame, the excess returns totalled almost 16 per cent in the US over the period covered. This is true across sectors and company sizes. 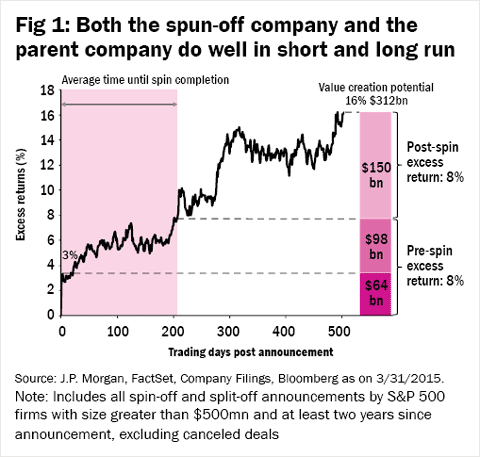 Spin-offs add value to both the companies - the new and the old
The report goes on to observe (see Figure 2): "One would expect that the separation of a high-growth subsidiary would lead to a decline in the valuation multiple of the RemainCo relative to the parent company. This intuition does not, however, play out in practice. We find that the valuation multiples of both RemainCo and SpinCo increase relative to the pre-spin company. We estimate the uptick in valuation multiples post-separation to be over 20 per cent. Admittedly, broader-market multiples also increased during that period, but after controlling for this general uplift in multiples, we still find the difference to be material, remaining in the 10%-20% range." 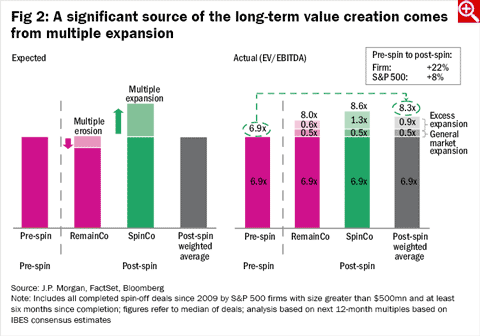 What causes the multiple expansions?
Well, the simple answer is - do we care? So long as the observed expansion allows investors to make money, finding explanations is not necessary. Perhaps it's the entrepreneurial spirit of the management that is unleashed. Alternately, it could be that investors understand the business better and are therefore able to assess its value more correctly. Most likely it is a combination of factors. The real question that is relevant to Indian investors is if this also happens in the Indian stock market?

A study by a domestic portfolio-management company seems to indicate that it is indeed the case. Unifi Capital carried out a study of spin-off opportunities between 2004 and 2014. Their criteria found 57 cases. To test the hypothesis, the company created a model portfolio of equally weighted investments across all opportunities. The performance of the resultant portfolio outperformed the major indices handsomely (see Figure 3). 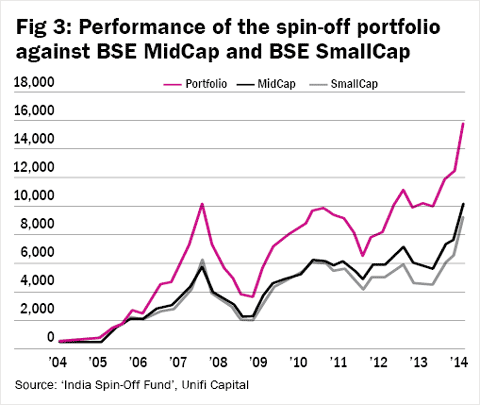 An article in a business paper listed out some of the recent cases of demergers (see Table 1). With a couple of exceptions, most have created value for investors. To see how it works in practice, below are time lines of two transactions that have occurred over the past couple of years. 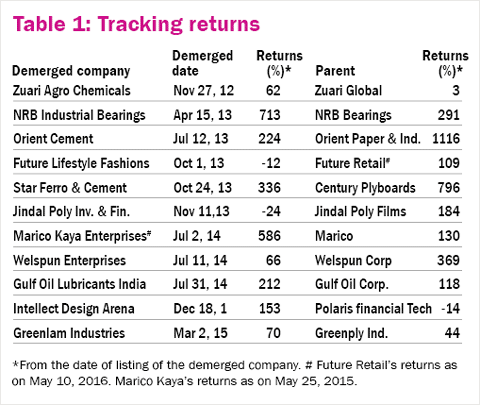 Case 1: Polaris - Intellect Design
Table 2 works out the date-wise performance of Polaris assuming that an investor bought its shares on the day the plan to demerge was announced. During this period stock markets were buoyant in anticipation of election results. Despite this, share values increased well beyond the market's rise. Value continued to get created even beyond the listing date of the spun-off company. It wasn't too late to buy even after shareholder approval was received. 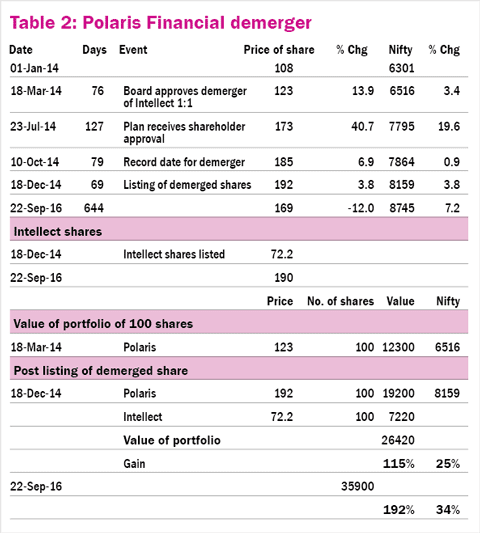 Case 2: Max India
Here, three companies were created out of the de-merger. Against a flat index, the spin-off resulted in a gain of almost 100 per cent for shareholders. See Table 3. 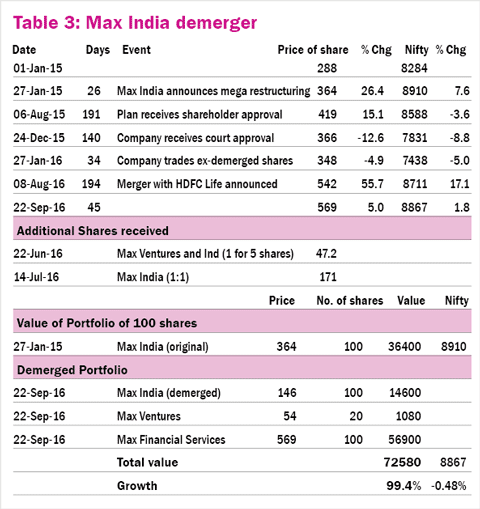 There is no 'formulaic' approach to investing that will make money all the time. In fact, the success of any formula will ensure that its common use erodes its usefulness. However, a portfolio of spin-offs followed consistently as a strategy is likely to yield superior results to investors without the need for excessive research in stock identification.
Interestingly, there seem to be an increasing number of companies adopting this route. Companies that have already made announcements and are in different stages of the spin-off process include Reliance Capital, SMS Pharma, Sintex, Orient Paper, to name a few. Of course, this is not meant as a recommendation to invest in these stocks. As always, caveat emptor!