Need for corrections | Value Research https://www.valueresearchonline.com/stories/32552/need-for-corrections/ Our interview with Gopal Agrawal, CIO & Chief Strategist, Mirae Asset Global Investments, where he spoke about the outlook on valuations and sectors

Our interview with Gopal Agrawal, CIO & Chief Strategist, Mirae Asset Global Investments, where he spoke about the outlook on valuations and sectors 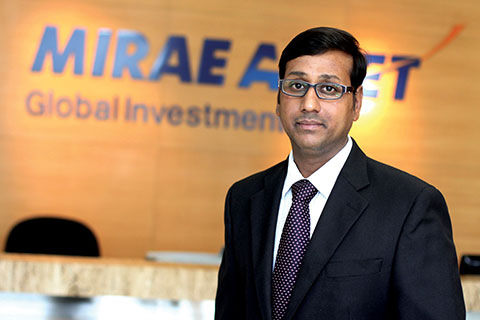 Mirae Asset Global is one of the relatively new fund houses to deliver really consistent returns across the ups and downs of recent market cycles. Mr Gopal Agrawal, Chief Investment Officer & Chief Strategist, Mirae Asset Global Investments, spoke to us about the outlook on valuations and sectors.

Do you believe that only macro reasons can cause a correction?
Absolutely, corrections in the stock market are always triggered by a macro-level dislocation. So if you look at any time in the past, even in January-February, there was dislocation in global financial markets. Oil was tanking, there was a question mark on growth and there was a big NPA issue with Indian banks. In 2007, when the correction took shape, oil had shot up to $147, we had high inflation and then a dislocation occurred. In 2013, we had the taper tantrum and inflation in India shot up to 10-11 per cent.

Can the Fed rate hike be another macro factor that triggers a correction?
It can cause temporary volatility but the Fed rate hike alone will not be the trigger unless something else also occurs. For instance, if the oil-market deal collapses, it may cause an oversupply in the oil market. For a country like India though, I don’t think even that is a worry. Some outflows due to FIIs may cause a temporary fall but I think we will recover faster than other countries. Globally, banks are under pressure due to negative interest rates, but in India, banks are better positioned due to healthy margins and better credit growth. I am also expecting the broad market to outperform the narrower market. For example, multi-cap funds should do better than large-cap funds.

Why do you think mid caps will outperform?
Let me elaborate on something that I have been saying for the last three years. I think I am being proved right about this. In a falling interest-rate scenario, mid caps always outperform large caps. At present, inflation is benign and there can be a further rate cut by the RBI. From a bottom-up perspective, people say large caps are cheaper than mid caps, but I want to share a few insights on this. If you take the Sensex, 10–12 companies which account for about 60 per cent of the Sensex’s profits have been impacted by issues such as capital allocation, NPA, commodity price risk, global slowdown and regulatory risk. That said, I do agree that some mid-cap stocks are trading at unreasonable valuations and need to correct.

So how do you position yourself, since you are a growth-oriented fund house?
We are avoiding two pockets of stocks on our funds – ultra expensive stocks and those with a very low P/E unless there is a chance of a revival in earnings outlook. We have also taken a big call on oil and gas, consumer discretionary and media. We have devised our portfolio strategy mainly from a bottom-up perspective and based on how sectors are going to perform. We are looking for turnarounds and continuous improvement of earnings visibility.

So what are the turnaround plays you are betting on?
We have made some investments in oil stocks. Oil bottomed in February. Normally, companies keep six months of inventory so there was no impact in the September quarter but from the December quarter, it will start to show up in earnings. We have also added corporate lenders in the portfolio. We are presently in a positive treasury-yield cycle and we will see some improvement in bank NPAs. Fresh NPAs may reduce materially because of positive developments in the steel sector. The Rosneft deal with Essar Oil is another sentimental positive.

Are you underweight on financials?
No, we are overweight on financials. If there is a revival in the economy, they will have to do well. Their books are monitored by the RBI. Consumer lending is on a very strong wicket, with still some way to go. Of the overall pie, 15-16 per cent is retail lending, of which 60 per cent is housing. Other sectors are also picking up now.

As far as private banks are concerned, everyone is now chasing retail lending – the same pie. Therefore, this pie has to expand or competition will eat into margins. So far, at retail-lending growth of 25 per cent or so, the pie is expanding. But how long it will play out, we have to watch.

Have you participated in recent IPOs?
We are very selective. We don’t think that IPOs call for a separate investment strategy. Wherever there is a business case, we have invested.

Mirae funds generally focus on larger mid caps rather than micro caps, which are more exciting for retail investors. Why is that?

A reasonably profitable company is a better multiplier and wealth creator in the longer run rather than a smaller company benefiting from a bump-up in the economic cycle. Our focus is on a scalable business model which will give us returns in perpetuity. That is how our fund has weathered bad periods and done well over a period of time.

How do you gauge governance issues at companies before they crop up?
Only by taking a close look at the numbers – the company’s balance sheet. Looking at numbers minutely and taking stock of trends in working capital and tax rates can help you make out what is happening at a company. An ever-expanding working-capital cycle with high receivables is usually a signal of accounting issues. I think the transition to Indian Accounting Standards will also help here. Plus, one thing I think should be done is that corporate results should be declared pre- or post-market hours. This will help everyone to not only get sufficient information but also analyse it before trading in the stock.