This is IT | Value Research https://www.valueresearchonline.com/stories/32332/this-is-it/ The ongoing downturn in the IT sector could just be the right time to load up on IT stocks The IT industry is one of the few sectors that has remained out of favour for the whole year. Since Jan 2016, the Nifty has risen by 14.29 per cent. The IT Index however, is down by 7.7 per cent. The extent of the underformance can be gauged by the following chart where both indices are normalised.

The underperformance started in June - until then, the returns were pretty close. In June , fears of Brexit took hold and the IT Index has lost 5.07 per cent since late June when the referendum results were known. The Nifty has risen by 7.91 per cent since then.

The underperformance is marked because nothing like this has happened in the past few years. Since 2014, the Nifty has outperformed the IT Index. But the IT sector and the broad market have generally moved in the same direction. It is only in the period since June 2016 that the divergence between the general market and the IT sector has become marked.

Brexit triggered a sell-off in IT stocks. Analysts said Indian IT companies would be hit hard. Morgan Stanley specifically mentioned seven Indian companies among 30 global majors, which it said would hurt most by the Brexit because of the high exposure to the UK and to the European Union. Of these seven, five were IT stocks, namely HCL Tech, Wipro, TCS, Infosys and Tech Mahindra. (The other two companies were Tata Motors and Godrej Consumer Products). Indian IT companies have used the UK as a springboard to locate headquarters of EU-facing businesses. Moreover, English is an official EU language, which makes it easy for Indian IT majors.

However, once the UK is out of the EU, this comfortable state of affairs will end. Indian companies might have to relocate to keep a foothold in the EU. Perhaps, they could go to Ireland. If English ceases to be an EU official language, that will also cause considerable inconvenience. This is in addition to any business that's lost due to economic contraction in Britain itself. 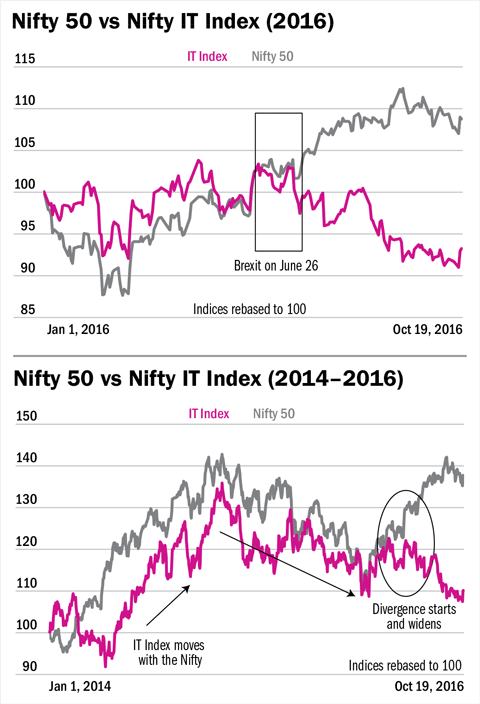 That's one problem. There are other issues arising from the generic global slowdown with concerns about deceleration in US growth and soft demand across the EU, Japan and China. Many IT companies have already cut their projections for 2016-17. There is reason to believe that the entire industry could end up struggling for a while.

The industry landscape is also changing. The day of the pure labour arbitrage is probably over. Indian IT firms made their bones putting together ant-farms of comparatively low-compensation coders who did low-end tasks and wrote lots of code. That was the outsourcing model.

The need for that sort of outsourcing is much diminished. To take one example, instead of maintaining its own servers and outsourcing the maintenance of the servers to an Indian IT firm, an MNC can simply dump its data into a cloud. The cloud management company will automatically perform the same tasks that the Indian IT services firm used to do, a few years ago. Plus automation and concepts like software as a service have greatly reduced the need for low-end IT competent labour forces. As Internet of Things, robotics, Artificial Intelligence, etc. catch on, the required skill sets will for IT professionals is changing and will change further. Indian IT companies will have to find new lines of revenues, as their old labour-intensive models shut down.

The stock market is reacting to the quarter by quarter downgrade of projections at the moment.

In fact, the US $150 bn Industry has maintained overall double-digit growth rates during an era when Indian merchandise exports have shrunk for seven quarters in a row. NASSCOM, says that 10-12 per cent growth could be registered even in this 2016-17 fiscal, though it says that it will review estimates after the second quarter (Jul-Sep 2016) results. Other analysts say that overall growth rates will edge to about 6-8 per cent.

None of India's largest firms managed double-digit USD revenue growth in 2015-16. Most majors have either explicitly pared down projections, or issued warnings that growth may slow, after delivering disappointing Q1, (April-June 2016) results.

For example, Infosys projected revenue growth of between 11.5 per cent and 13.8 per cent in 2016-17 in April, when it declared FYy 2015-16 results. It cut forecasts in July to "at best 12.3 percent", after poor Q1 results, and the CEO has warned that further downgrades were possible. Other majors have also been hurt. TCS has issued a warning about Q2; Wipro has seen profits shrink in Q1 and says revenues in Q2 will "at best" rise by 1 per cent over Q1; Cognizant expects to register the lowest growth rate since 1996, cutting estimates from 14 per cent (Jan 2016) to 9.5 per cent (Aug).

The global downturn has meant that banks, finance and insurance companies, which contribute roughly a third of Indian IT revenues, are investing less at this time. Legacy lines such as managing servers and developing applications are being phased down. As of now, new "digital" lines such as cloud computing, mobility and social platforms are not generating enough to totally offset all the contractions in BFSI.

Is this a threat, or an opportunity? There is no obvious visibility of new business. The IT industry will need to shift focus and move away from its labour-intensive legacy businesses to find new verticals, and new markets.

The Nasscom President recently pointed out that the next phase might well see more jobs being created outside the industry than within, due to the positive externalities of Big Data, artificial intelligence and Internet of Things. It is quite likely that the industry will see reduced generation of employment or even, large scale benchings.

However, the industry does, almost by definition, hire some of the smartest people. Companies are looking for investments in intelligent platforms, automation, seeking partnerships with cloud computing firms, and forging partnerships with social start-ups. It is quite early in the business cycle for many of these areas. Indian IT firms might go through a bad year or six quarters as they reboot. But they should be able to make serious headway eventually.

The industry will also be looking at domestic market in a year of slowdown. There's work opportunity opening up there with Smart Cities, Digital India, building GST compliant mechanisms (and rolling out GST itself) etc. At the same time, IT remains a strong hedge against rupee depreciation; the industry has always delivered extraordinary returns when the currency is under pressure.

The IT industry is at a cross roads. Many of the current players will not make the transition to the new set up where skills in automation, AI, clouds, social, mobility, count for more than mere bums on seats. But some companies will surely make that transition. This downturn in valuations might just be a good time to employ a shotgun approach and buy stakes in several IT companies.