Avoiding high P/E stocks | Value Research https://www.valueresearchonline.com/stories/32298/avoiding-high-p-e-stocks/ Only by looking at the bigger picture can returns be made in a sustainable manner over the long term The price-to-earnings ratio (P/E) is widely used to assess valuations. While it's desirable to buy quality stocks at cheap valuations and thus low P/Es, it is often seen that companies which have high earnings growth rate or bright prospects or high earnings visibility tend to trade at high P/Es.

However, one should not overpay for a company's prospects. If the company fails to maintain the projected growth rate or investors discount the company's ability to grow due to macroeconomic or industry concerns, the hardest hit are those who have paid a higher multiple.

The table below presents a list of companies which had high EPS growth rates and high P/E multiples in 2006, along with their performance over the subsequent decade. Considering their growth rates and the market sentiment regarding these stocks at that time, the high P/Es appeared 'justified'. But even ten years hence, those who had invested in these companies would have made almost no gains in spite of high profit growth.

Though there are also companies with high P/Es that have performed well over the decade, the point remains that one should better be safe then sorry. Only by adopting a commonsense approach to valuation and zooming out to look at the bigger picture can returns be made in a sustainable manner over the long term. 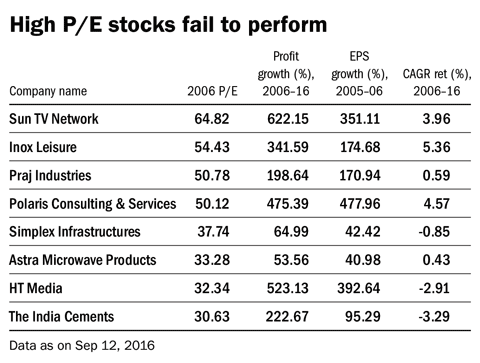