Giants fall too | Value Research https://www.valueresearchonline.com/stories/32041/giants-fall-too/ Belonging to the market index is no guarantee that a stock will continue to beat the market and remain an outperformer 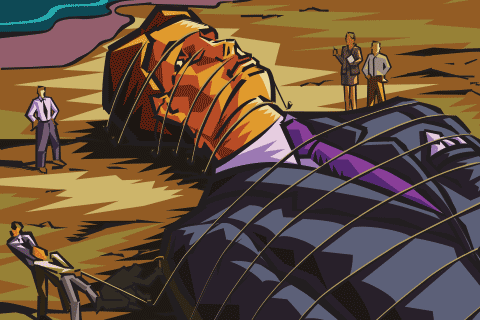 Common investing wisdom tells us that the companies which comprise the market index, such as BSE Sensex, are stalwarts in their respective industries. They're considered by many to be safe investments that will lead the market in earnings and growth. The problem with this hypothesis is that it is wrong. In the last one year, five index companies have reported a fall in net earnings, aggregating to 33 per cent.
To be fair, the remaining index companies did report earnings growth that aggregated 11.5 per cent. This story, however, looks at those companies that saw their net earnings decline. The table below lists out the five companies that make it to this list. We discuss the top three with the biggest fall in earnings.

State Bank of India: The country's largest banker has been struggling with higher provisioning after the RBI governor, Raghuram Rajan, initiated asset-quality reviews for banks. Traditionally, lenders had been lax about non-performing assets (NPAs). Asset-quality reviews forced the industry to create provisioning to address potential NPAs. They also turned the markets against the sector. After plunging 28 per cent late February this year, the S&P Bankex has returned 4 per cent in the last one year. During the same period, SBI, which saw its bottom line shrink by 51 per cent, is down 7 per cent in the market.

Dr. Reddy's Laboratories: Dr Reddy's, which was once the market favourite, has seen its fortunes tumble in recent times. In the most recent quarter, its revenues declined across geographies as well as verticals. Its products faced increased competition in the US, higher pricing pressure and moderating volumes. North America revenues contracted 16 per cent (YoY); revenues from emerging countries shrank 26 per cent; and Europe revenues were down 16 per cent. In November last year, the company received a warning letter from the USFDA for three of its manufacturing facilities, located in Srikakulam (Andhra Pradesh) Miryalguda (Telangana) and Duvvada (Vishakhapatnam). This has had a bearing on the stock performance, too. In the last one year, Dr. Reddy's has reported a bottom-line decline of 34.5 per cent. Its stock has lost close to 30 per cent in the same period.

GAIL (India): The country's largest gas-transmission company has seen its bottom line evaporate by 32 per cent. In the last couple of months, GAIL has suffered from an unfavourable petrochemical business, lower gas-transmission volumes and tariff issues.
Things are improving. The company has guided petrochemical volumes to move up. The piped-and-natural-gas regulator, the Petroleum and Natural Gas Regulatory Board (PNGRB), raised tariff on GAIL's K.G. Basin pipeline from Rs 5.56 per MMBtu (million British thermal unit) to Rs 45.32 per MMBtu with effect from April 1, 2016. This order is expected to result in a non-recurring post-tax impact of Rs 170 crore or Rs 1.4 per share for FY17 (IDFC estimates). The GAIL stock is up 10 per cent in the last one year.

The above cases illustrate that belonging to the market index is no guarantee that a stock will continue to beat the market and remain an outperformer. The next time you think large companies are immune to downside risks, think of these instances.