The Governor who picked your pocket | Value Research https://www.valueresearchonline.com/stories/31768/the-governor-who-picked-your-pocket/ Duvvuri Subbarao's book 'Who moved my interest rate?' is surprisingly candid for someone who occupied such a pivotal office

The Governor who picked your pocket

Duvvuri Subbarao's book 'Who moved my interest rate?' is surprisingly candid for someone who occupied such a pivotal office 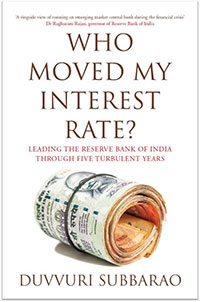 10.83%, 12.11% and 10.92%. These figures are not the returns of some blockbuster mutual fund. They are the average inflation rate in the years 2009, 2010 and 2013 - when Duvvuri Subbarao was RBI Governor. These were the years that burned a hole through your pocket, broke the self-confidence of many a mutual fund investor and devastated pensioners. Subbarao himself writes about a call he got from a senior citizen in Nagaland giving him a detailed account of his pension and explaining to Subbarao, how it was becoming increasingly difficult to make ends meet. "Do something about the prices sir, especially the price of cooking oil," the man pleaded. Governor Subbarao did very little.

Whodunnit?
Many would argue that the Government (that is, the UPA) and not the RBI was responsible for the inflation in those years. This is true as and is a point Subbarao himself makes over and over again in his book. However, as RBI governor, he could and should have hiked interest rates faster to instill a sense of discipline in the government and to protect the people of India and the currency they trusted. He acknowledges this failing, noting that he was called 'baby-step Subbarao' due to his timid interest rate hikes. In this respect (that of honest admission of his failings), at least, Subbarao's book is highly creditable.

A major cause of the disaster of those years Pranab Mukherjee's stint as Finance Minister. In April 2012, Subbaro cut rates by a significant 0.5% (in the face of galloping inflation) on Mukherjee's assurance of fiscal discipline and subsidy. As the RBI governor puts it, he was 'let down'. To add insult to injury, the Finance Minister essentially gave away that particular RBI decision to the media an hour before it was scheduled to be released - making a mockery of central bank independence.

'Independent' RBI
Subbarao writes repeatedly of Government interference in the RBI. In India, the Government appoints the RBI Governor and this is (whatever it may be dressed up as) an essentially political appointment. He writes candidly that there was pressure from the Government not to tighten interest rates while he was the Governor. On one occasion, Manmohan Singh asked C Rangarajan, to convey to Subbarao that he did not expect the Governor, who was a former civil servant and 'understood its political compulsions', to take such a firm stand on interest rates. On another occasion, the government refused to renew the terms of Deputy Governors Usha Thorat and Subir Gokarn, despite a convention placing this decision in the RBI Governor's hands.

The government succeeding the UPA II went one step further and refused to renew the term of the RBI Governor himself. It passed a law setting up a 6-member Monetary Policy Committee to set interest rates with three members from the RBI (including the Governor) and three 'external' members. However, all external members will be appointed by, as you guessed, the Government.

Parting Quote -
"Twenty years ago when I had a thick mop of hair, I used to pay ₹25 for a haircut. Ten years ago, after my hair started thinning, I was paying ₹50. Now when I have virtually no hair left, I pay ₹150 for a haircut. I struggle to determine how much of that is inflation and how much is the premium I pay the barber for the privilege of cutting the Governor's non-existent hair." - Duvvuri Subbarao, 22nd Governor of the RBI (2008-2013)