The Centre has urged the States to cap prices of essential commodities. But basic economics tells us that price controls lead to shortages Us, hapless consumers, have cause to rejoice, as the centre has urged the states to cap prices of pulses, edible oil and other essential commodities! A Press Information Bureau memo released on Sunday, titled "States Asked to Consider Pricing Policy to Cap Prices of Essential Commodities", contains the following paragraph:

"States have also been requested to consider a pricing policy for pulses and such other essential food items under Section 3(2) (c) of the EC Act and to make it enforceable for all the stake holders to cap the prices of essential commodities."

Before you whoop in joy though, dart to your nearby store and grab as much of these as you possibly can, because pretty soon they will become unavailable if the price controls go through. Basic economics tells us that price controls lead to shortages. 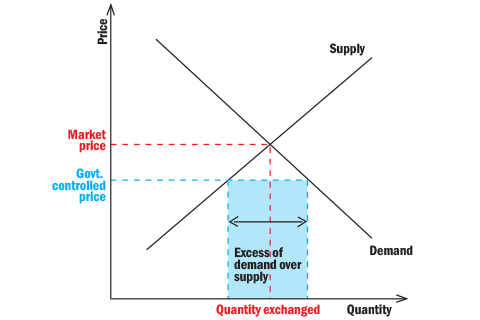 Assuming the diktat goes through, what would the producers and those "evil" middlemen do? The least profitable ones will quickly go out of business. The most profitable ones will see no point in increasing production since their rate of return is capped and look to expand production in the commodities without price controls. Meanwhile, the lower prices would increase demand and these products would fly off the shelves, quickly becoming unavailable. With consumers wanting more than producers are willing to produce, the government will then have to step in and ration the scarce commodity or incentivize the producers to produce more.

If the government adopts rationing, all it has done is adopt a dual pricing system, wherein the essential commodity is bought with both ration coupons and rupees. The scarcer the commodity, the greater the value of the ration coupon. Pretty soon, there will be a black market for the scarce commodity. Instead of allowing ethical businessmen to ply their trade, the government would thus end up encouraging those who are willing to break the law.

If the government goes the subsidy route to incentivize production, it is merely rewarding those with the highest purchasing power to buy the essential commodities since they benefit the most from the subsidy. For example, a subsidy will enable the rich to buy more of a subsidized product, leaving less for the poor. The government is also paying for the subsidies via taxes. But the taxpayers are also the consumers! What one benefits as a consumer, one loses as a taxpayer, so there is no net benefit.

The other way to make price controls work would be to adopt it across the whole economy. Even then, it wouldn't really work as Venezuela is quickly finding out.

In sum, the government's attempt to solve a social problem by fixing prices will have unintended consequences which will defeat the purpose of price controls in the first place. The best way to bring down prices is to let the market work. For example, mobile phones got better and cheaper due to a free market, and not price controls.

Parting thought:
"A power over a man's subsistence amounts to a power over his will." - Alexander Hamilton, founding father of the United States of America.