The next decade | Value Research https://www.valueresearchonline.com/stories/31597/the-next-decade/ From the widespread use of renewable energy and nanotechnology to driverless cars and cryptocurrency, here is how the next ten years may unfold

From the widespread use of renewable energy and nanotechnology to driverless cars and cryptocurrency, here is how the next ten years may unfold 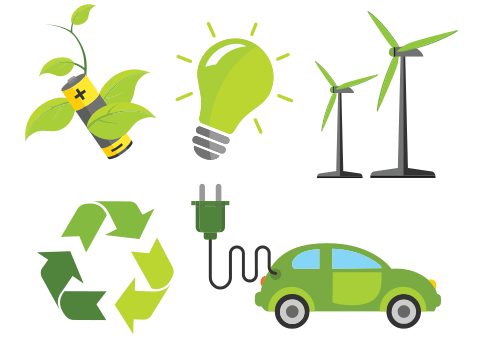 Just over 11 years ago, on February 14, 2005, the domain YouTube.com was activated. The first video was uploaded on April 23, 2005. YouTube now claims over 1.3 billion users, with close to five billion videos being watched every day. In 2007, Apple launched the iPhone and changed the way users interacted with the cell phone. Touchscreens replaced keyboards.

Every decade, the world as we know it, changes silently but at a rapid pace. Here is my take on some of the key developments likely over the next decade.

Energy
Renewable energy (excluding large hydro projects) made up 53.6 per cent of the new power-generating capacity installed in 2015. For the first time ever in the history of the world, renewables represented the majority of additions. Renewables attracted more than double the $130 billion committed to new coal- and gas-fired power stations in 2015. This was the largest differential in favour of renewables to date.

Solar-power costs continue to drop. Solar-generating costs in India are now below `5 per unit - lower than what most commercial and industrial users pay for electricity. Importantly, battery costs have finally started falling; they have fallen to almost a third over the past five years. 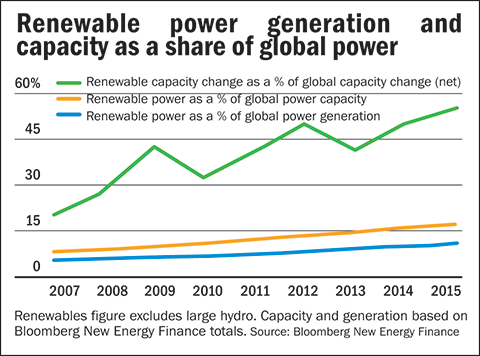 Distributed generation
The real revolution in energy is, however, coming in the form of flexible electronics and nano technology in solar generation. Within the next decade, clothes that we wear will generate enough power to charge various devices that will accompany us. Wireless charging will ensure that the communication device, the device that will allow us to interact visually while gathering information about our surroundings, is auto charged while in the pocket, and the bio sensors that track our body functions are always powered up. 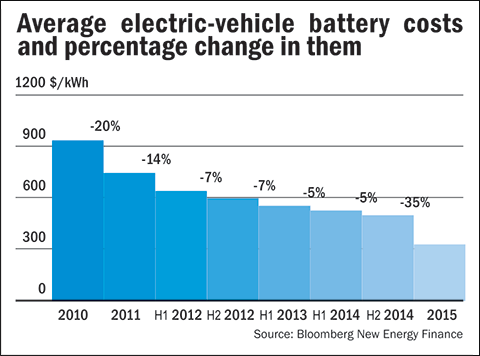 Transportation
Driverless, battery-driven cars, connected through Uber kind of networks can replace individual car ownership and improve public transport. California, USA, legalised driverless cars in 2012. The UK will do so this year. While most car manufacturers are working on developing driverless cars, it is likely that easy availability may reduce the need for self-ownership of cars. If all cars on the road were driverless, the possibility of an accident would fall considerably. Lower accidents can reduce car- and accident-insurance markets while reducing the load on emergency services responding to transport-related accidents. Algorithms that communicate with other cars can optimise the speed of movement.

Drones, once used for military purposes, are now being used for delivering packets to homes. It is not inconceivable that drones will develop enough power soon, at a low-enough price, to be able to fly people using power packs slung on the back.

Blockchains and cryptocurrency
Early in June this year, representatives from the central banks of 90 countries participated in a conference housed in a building of the US Federal Reserve. Titled 'Finance in Flux', the conference invited digital-currency entrepreneurs and advocates to discuss the technology and policy issues related to digital currency. David Andolfatto of the Federal Reserve Bank of St. Louis wrote, in his blog, about a federal-backed 'Fedcoin' as a replacement for cash. Despite naysayers and significant regulatory push-back, the concept of cryptocurrency (for example, Bitcoin) refuses to go away. The concept of blockchain is even more powerful as it removes the need for intermediaries in executing and maintaining transaction records. Banks, exchanges and other financial marketplaces need to examine their rationale for existence over the next decade.

Healthcare
A revolution in healthcare, perhaps one of the most-exciting areas of change, seems within reach. Improved haptic feedback technologies, developments in virtual reality and highly reliable communication network make even complex surgical interventions possible by remote. Few highly skilled surgeons could offer services worldwide to the patients located in operation theatres anywhere in the world.

Wearable devices that monitor, store, analyse and transmit vital body data can obviate the need of patients to travel to hospitals. Smaller and transportable medical devices (it's now possible to carry out dialysis at home) can reduce the need for large hospital facilities and highly trained technicians. Developments in artificial intelligence will offer diagnostic services equal or better than those of the general physician.

Customised medicine based on the genomic make-up of the individual may be a reality sooner than expected.

In all this, the level of training required of the majority of healthcare technicians may reduce. What may be required is a small pool of highly trained doctors and surgeons, supported by relatively low-skill manpower backed by technology and artificial intelligence to replace the mid-tier service provider.

Business disruption and long-term investing
Many of the developments that are likely to happen over the next decade will again change the world as we know it. Additive manufacturing will likely replace standardised mass-production facilities in many products. Artificial-intelligence-based systems are finally beginning to deliver on their promise. Robots will replace much of manufacturing as we know it. And this is only one more of the many changes outlined earlier.

Many of the leading companies in the world today were set up less than a decade ago. They threaten existing businesses and perhaps will drive many to extinction. In such an environment of rapid change, does investing for the long term make any sense? How is it going to be possible to predict what happens to a business over the next ten years, when it is not possible to foresee where the competition is going to come from in the next two?

Despite this realisation, global markets continue to trade at higher ends of valuation bands as if cash flows would continue to grow over long periods for most companies. In part, this can be explained by the low and negative interest rates witnessed in the large economies of the world. Assuming that it will change at some stage, will the financial world witness a serious reset of asset prices? I leave this for you to ponder.