Making peace with randomness | Value Research https://www.valueresearchonline.com/stories/30681/making-peace-with-randomness/ If you need a reason for every move of the equity markets, then most of the reasons you'll find will be fictional

If you need a reason for every move of the equity markets, then most of the reasons you'll find will be fictional 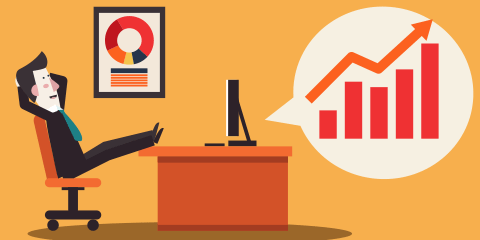 I switched on the TV and turned to a well-known business channel. The anchor was analysing the day's movement on the equity markets. She said, "The Sensex was up by 275 points today, while the Nifty was up 92 points. There was no real reason for these moves. Like most days, today was a day of random events on the stock markets. We have nothing else to add so our channel will be shut till tomorrow morning."

That's what an honest business channel would sound like, but of course, this won't ever happen. The gyrations of the stock markets over the recent months have seen a lot of people hunt for cause and effect. The steady decline over a period, as well as the sudden revival has many different sets of reasons behind them that the talking heads in the business channels promote. But there's a problem, which is that everyone is united in the belief that there are clear and identifiable reasons for everything that is happening. There is reasonable story--actually, many reasonable stories--about why the equities markets are doing what they are doing. For most of the media, there is a narrative that gets built every morning and every evening explaining what happened and what is about to happen.

Investors too, believe in this whole system. Events happen, and the equity markets respond to it. And every move can be connected to a cause. It's unfair to blame just the business media for it. Finding patterns and believing in cause and effect is an integral part of the human psychology. As a species, we have probably survived and flourished by figuring out how the world works, and being able to anticipate what would happen in the near future. For example, ancient human beings wouldn't have survived if they hadn't associated eating food that smells rotten with falling sick. Figuring out cause and effect is central to dealing with the world.

However, it's easy to take this too far. Most superstitions are based on seeing too much associations with random events. A black cat crossed your path? Well, there are millions of black cats in the world and they are constantly running around crossing people's paths. Some of these people will randomly have bad things happening to them, thereby strengthening the belief in the superstition.

Much of what we believe about investments comes in this category. Someone is managing a mutual fund and takes certain actions. The fund does well. Immediately, we conclude that the fund performed well because of that fund manager's actions. Ergo, he must be a good fund manager, and will continue to do so in the future. But this conclusion may not be correct--we have been fooled. We have been 'fooled by randomness'.

Of course, that's the title of this great book that Nassem Nicholas Taleb wrote more than a decade ago. Taleb's book should be compulsory reading for every investor and fund manager. But apart from ritual references to 'black swans', which was the idea behind his later book, no investor or commentator pays much attention to the real idea here. Most of what happens in the markets is random. We pick up patterns in this randomness and try to draw inferences and make predictions. Those work sporadically when we get lucky, but instead of recognising randomness, we think something has succeeded. The central idea here is that there is a lot of randomness in investing and if you try to analyse everything with the assumption that it is not random, then you will not be able to understand what is going on and how to cope with it.

The only way to cope with this is to understand that beneath the randomness, there are patterns but they manifest themselves over long periods of time, driven by fundamental attributes.