Milton Friedman: The man who gave us monetarism | Value Research https://www.valueresearchonline.com/stories/30252/milton-friedman-the-man-who-gave-us-monetarism/ Witty and insightful quotes from the most influential economist of the second half of the 20th century

Milton Friedman: The man who gave us monetarism 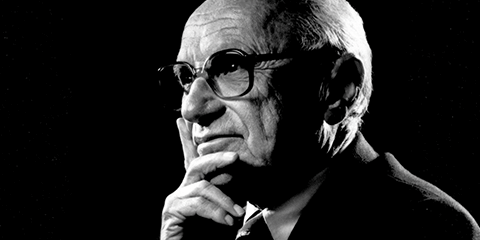 "There's no such thing as a free lunch," said Milton Friedman, who won the Nobel Prize in Economic Sciences in 1976. Though this quote isn't originally his, credit goes to him for popularising it in economics. Friedman was talking about opportunity cost when he said it. Friedman is best known for monetarism. Monetarism means adjusting the money supply to balance inflation and growth. When the RBI governor ups and downs interest rates, he is actually using the principles of monetarism. Friedman is not only among history's most influential economists, his theory was also counter to Keynes', another heavyweight in economics. We have compiled below some quotes from Friedman. Friedman was not only a free-market advocate, he also warns about government's intervention in the economy. Some of his insights are simple yet remarkable. And perhaps many of us will find the last quote quite controversial.