Delivering big-bang growth | Value Research https://www.valueresearchonline.com/stories/29569/delivering-big-bang-growth/ Lupin started as a TB specialist and grew itself over the years through acquisitions. Things went on so well that it made its shareholders as rich as Croesus

Lupin started as a TB specialist and grew itself over the years through acquisitions. Things went on so well that it made its shareholders as rich as Croesus 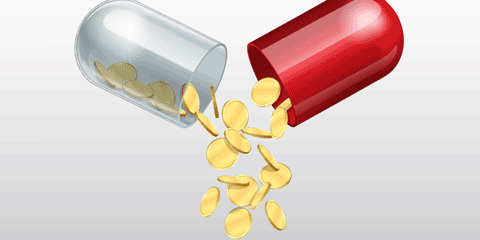 Lupin tops the list of super stocks with multibagger gains that can give any mid-cap multibagger a run for its money. If you had invested ₹10,000 in Lupin ten years ago, you would have a cool ₹2.69 lakh today. That's 27 times your investment.

Lupin, the specialist in anti-TB therapy, is now a diversified pharma company that ranks eighth in the domestic market. It caters to the chronic therapies for the cardio-vascular system (CVS), diabetes, respiration and the central nervous system (CNS). Lupin still leads in the anti-TB market with a 53 per cent market share and ranks third in CVS and respiratory drugs. In the last ten years, Lupin has grown its sales and net profit by 26 per cent and 38.7 per cent CAGR, respectively. 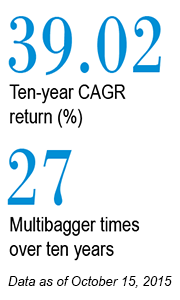 In recent years, Lupin has increased the pace of acquisitions. Between FY08 and FY14, it made seven acquisitions. Last financial year, it acquired three companies and this year it has already made four acquisitions, the largest of which is the US-based Gavis, which was acquired for $880 million.

The Gavis acquisition makes Lupin the sixth largest in ANDA (Abbreviated New Drug Application) pipeline in the US, beating even Indian heavyweight Sun Pharma in the ANDA count. It also gives Lupin entry into the US derma market, with a portfolio of 25 plus products. The management believes that Gavis' $96 million revenue can grow three times by FY18, driven by the more than 50 product approvals which are in the pipeline. 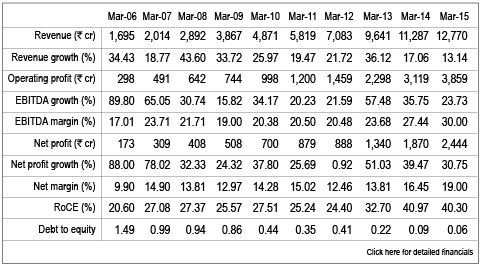 Lupin's outperformance has re-rated the stock. It trades at double its ten-year average valuation. Earnings expected to grow at 21 per cent CAGR over the next three years (Motilal Oswal estimates) make current valuation of 40 times earnings expensive. Wait for valuations to cool down before buying.